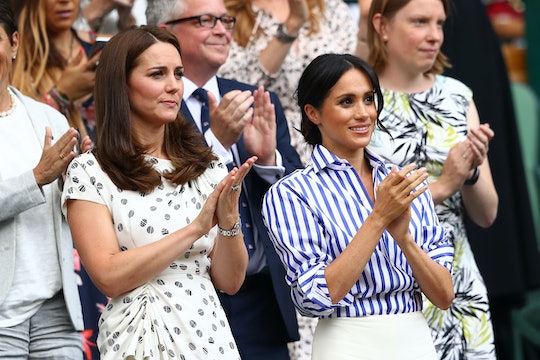 Here's What The Palace Had To Say About 'Kate Vs. Meghan: Princesses At War'

This month, TLC imports Channel 5's documentary about the U.K.'s allegedly feuding duchesses for American audiences to enjoy, but viewers tuning in may be wondering what the Palace response to Kate Vs. Meghan: Princesses At War is. They don't make a habit of commenting on every piece of media about the royals, especially since so much of it gets made and so much of it is sensationalized. (See: the subtitle Princesses At War.) But ignoring rumors about its supposedly embittered royal family is not causing them to die down, so the Palace did actually step in this time to shut down a few claims.

First, there was an alleged incident in which Meghan spoke so sharply at her bridesmaid dress fitting that it left Kate in tears, according to The Sun. After that, anonymous sources said things were so tense between the two that at one point, Meghan "berated" Kate's staff. An unnamed source told The Sun that Kate stepped in to "slap down" Meghan, reportedly saying, "That’s unacceptable, they’re my staff and I speak to them." It's also been rumored that "Meghan has very high standards and is used to working in a Hollywood environment," according to The Sun, which has supposedly caused something of a culture clash when working with royal staff.

These rumors eventually reached such a point that the Palace was forced to comment on the matter, albeit as briefly as they could manage. "This never happened," they succinctly told The Sun of the reported argument. And that was it. So while the Palace hasn't commented on Princesses At War directly, folks tuning in can be assured of where they stand on the feud at the center of the story: it's nonexistent. That denial doesn't come as a huge surprise, either, although the fact that they felt compelled to comment on the story at all is pretty unusual for the Palace.

The alleged root issue of all this actually doesn't have much to do with Kate and Meghan at all, but rather, with William and Harry. When it was announced that Harry and Meghan wouldn't be moving into a Kensington Palace apartment adjacent to William and Kate, the latter were rumored to have felt rejected. Instead, Harry and Meghan announced they would make Frogmore Cottage in Windsor their permanent residence, which makes sense for any young couple about to start a new family. To be honest, this sounds like a completely normal and common sibling fight — one sibling wants to remain close while the other wants to gain some independence. There probably are grains of truth in this story, but the opacity with which the monarchy operates makes it easy for rumors to fly.