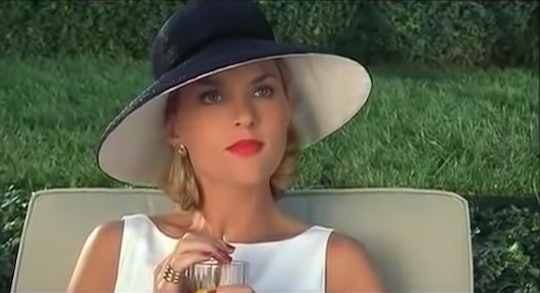 Oh, nostalgia. In a throwback that made my 90s baby heart sing, Meredith from The Parent Trap, Elaine Hendrix, penned a tweet about her co-star Dennis Quaid's engagement to a 26-year-old that even Annie and Hallie Parker would've approved of. The internet reactions to Quaid's engagement have been a bit, well, harsh. But Hendrix's quip was equal parts hilarious and heartwarming considering her history with Quaid and I, for one, am here for it.

On Monday, Quaid announced his engagement to girlfriend Laura Savoie — who is, among other things, 26 years old — saying it was "very much a surprise," as Extra reported. “I had the ring in my pocket. It has been kind of a month-and-a-half plan — I wanted it to be private,” he told the news outlet. “She was actually taking a selfie of us, and I put the ring in front and said, ‘Will you marry me?’ And then she fell down.” The proposal came while the pair were in Hawaii promoting Quaid's new film, Midway, according to People.

Shortly after news of the engagement broke, Hendrix tweeted to Quaid saying, "Watch out for those twins," linking to a Page Six tweet covering the story. Ironically, Hendrix's Parent Trap character, Meredith Blake, was also a 26-year-old blonde — albeit there were fewer years in between those two characters.

For those who didn't spend their days dreaming of going to summer camp with the Parker twins, here's a little backstory to explain why Hendrix was so on-point with her tweet.

In the 1998 Parent Trap remake, her character, Meredith, was the girlfriend everyone loved to hate, planning to marry the rich vineyard owner Nick Parker (played by Quaid) and ship his twin daughters off to boarding school. Loyal to their adorably frazzled fashion designer mother, Elizabeth James (played by Natasha Richardson), the twins hilariously tortured Meredith in an attempt to reunite their parents.

I won't go into all of the specifics, but my personal favorite prank has to be when they basically drugged their almost step-mommy dearest and sent her sailing across a lake on air mattress. My own childhood antics never quite lived up to the expectations that this movie instilled in me. But, alas, I digress.

Hendrix's tweet prompted a series of hilarious responses of Meredith Drake's most iconic lines justifying her relationship to Quaid's on-screen twin daughters — both of whom were played by a young Lindsay Lohan.

"Being young and beautiful is not a crime you know," one person tweeted. "He’s exactly the kind of man I always planned on marrying," added another. "Hate to break it to you angel, but you are no longer the only girl in Nick Parker’s life. Get over it." This is the reason I still have a Twitter account, you guys.

All jokes aside, Quaid and Savoie seem very happy together. Besides, I'm sure Lohan has outgrown her characters' torturous tendencies — but Quaid does have a pair of fraternal twins of his own, so there's that.