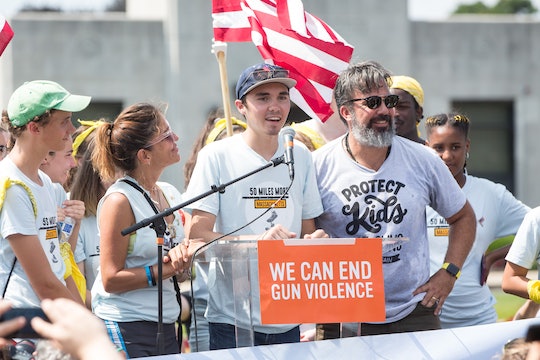 One Year After The Parkland Shooting, Here's How You Can Keep Fighting For Change

Long after a tragedy, ripples of pain and desire for change persist in the public conscience. Each devastating incidence of gun violence in the United States renews a call for reform. The Parkland school shooting happened one year ago today, and if you feel moved to act, here's how you can keep fighting for necessary change.

A gunman opened fire on Marjory Stoneman Douglas High School in Parkland, Florida on Feb. 14, 2018, as NBC News reported. A total of 17 people lost their lives that day and another 17 were injured. The shooter was later charged with 17 counts of premeditated murder, according to NBC News, but the survivors of the shooting said that was not enough justice. Instead, many of the students at Marjory Stoneman Douglas High School went on to become champions for gun safety and national reform. By organizing marches, school walkouts, and voter registration drives, the Parkland students are demanding change and will continue to do so.

Hogg went on to explain to NPR that while he and his classmates got a lot of attention following the 2018 shooting, gun violence is not an isolated issue in Parkland. "This issue is beyond Parkland. This issue is about America and the war that we have on our streets, because it's time for us not to fight each other but to truly fight gun violence."

But how exactly does one fight something as broad as gun violence? Hogg and the other survivors have a few suggestions.

Writing for The Guardian, a few Marjory Stoneman Douglas students outlined their advice for those looking to bring about change. Among their recommendations: voting in elections and contacting representatives.

"Every vote matters, your vote matters," they wrote for The Guardian. "The 2018 midterm elections proved this, with staggeringly close margins in states such as Florida and Georgia that prompted recounts."

They continued, "Maybe you feel that, you, as an individual, can’t do anything to change the way the world is, but your representatives can. Contact them: email, call, write letters or even go to their offices. There is power in numbers and the slightest initiative can contribute to an entire societal wave demanding reform."

Donate to Organizations Pushing For Change

While it can feel like one person's individual effort won't do much in the face of such a massive issue, you can make a difference. And a number of organizations are there to help you do so, as HelloGiggles noted. Here are a few that would put your donations to good use:

Beyond just donating money, donating your time is a powerful way to make a difference. In their article for The Guardian, the Parkland students listed March for Our Lives, Moms Demand Action, and the Brady Campaign as good places to start.

As for the faculty, staff, and students of Marjory Stoneman Douglas High School, they have opted to take the anniversary of the shooting and dedicate it to reflection, service, and time to grieve, as TIME reported. The school will have a nonacademic school day and the Broward County School Board is sponsoring a "Day of Service and Love."

So, as you spend your day reflecting on how far America has come since the Parkland shooting, look to the future and consider how you can make an impact.