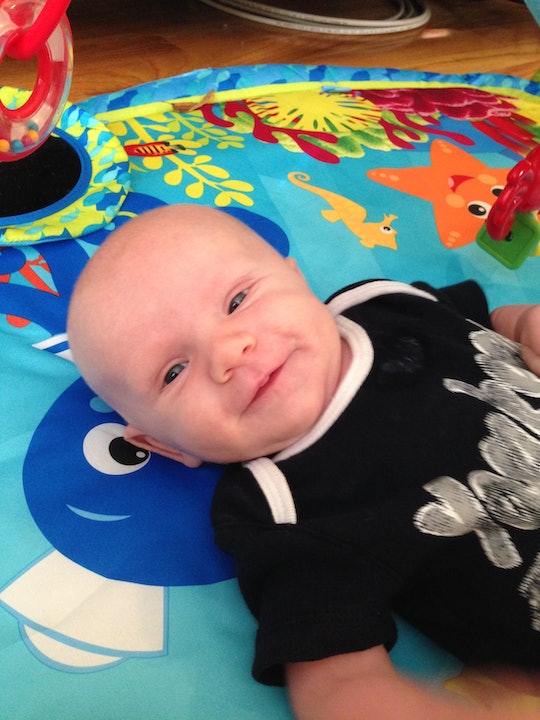 My Pediatrician Accidentally Injured My Baby During A Checkup

My son, Rider, was eight-weeks-old when I called the pediatrician.

“I think the bones in my baby’s head may have moved,” I said, my voice cracking.

“Why don’t you bring him in so the doctor can check him out,” the receptionist replied.

A nervous first-time mom, I made sure Rider spent tons of time on his tummy, confiscated any stuffed animals with button eyes because they were choking hazards, and drove at a top speed of 10 miles per hour any time Rider was in the car. And while I was excited to become a baby-wearing mom, once Rider was born, I couldn’t leave the house with him in the contraption.

I worried that the straps would loosen and he’d land on the concrete, or that if I stumbled, my newborn would break my fall. When I saw bolded-type that said “suffocation hazard” and fine print on the box advising wearers to “check your child often” to make sure he’s still breathing, I shoved the carrier in the closet and closed the door.

On the morning I called the pediatrician, I had lowered the stroller down to the street from a high curb, and it gave a little bounce.

The doctor checked Rider’s vitals. As he was listening to Rider’s heartbeat, a square piece of plastic holding stethoscopes came crashing down onto my eight-week-old’s forehead from high on the wall.

Did I just cause shaken baby syndrome? I worried. Did skipping that step “jostle” him or was that classified as a “shake?” I poked my head into the carriage and saw the peaceful rise and fall of his chest. He was fine.

I took out my phone and searched Google to be sure. After a street-side education on shaken baby syndrome, I realized it doesn’t occur from a single jerk of the stroller. I gave him another once-over and this time noticed a ridge of bones slightly protruding from his upper forehead.

Did his head always look like this? I tried to remember.

Time to Google again. I typed in an absurd sentence like, “jostled stroller and bones in baby’s head moved.” That exact phrase didn’t come up, surprisingly, but I found tons of information on babies who required surgery because their growing heads fused together too soon. I worried that I somehow did this to my child.

At the doctor’s office, Rider sat on the exam table, grabbing at the white crinkly paper and cooing. I was clearly overreacting. The doctor checked Rider’s vitals. As he was listening to Rider’s heartbeat, a square piece of plastic holding stethoscopes came crashing down onto my eight-week-old’s forehead from high on the wall.

Rider wailed, and I pulled him into my arms. The doctor and his assistant were mortified. Rider continued to scream while the pediatrician checked out his injury. There was a small cut, and a bump was already forming.

It gave me the jolt I needed as a new mom to move past the fear.

Once Rider calmed down, the doctor inspected the bones on his head, the reason behind our visit, and told me it was the coronal suture – something all babies have.

He detailed this piece of baby anatomy for me, but I wasn’t concerned anymore. Instead, I focused on the sad reality that I brought my son to a doctor for something that wasn’t an issue, and wound up causing a real one. The pediatrician sent us on our way with instructions on how to care for his injury: Tylenol, topical ointment daily, and a watchful eye.

During that visit, something in me shifted. The accident took away some of my fear. If my son could get injured at the pediatrician’s office, the safest place to be with your child, then there was no completely protected place. He’d be just as secure if we were out in the world than at home or even with a doctor.

Once Rider’s shiner healed, I started venturing outside of my comfort zone. We took a bus and two New York city subways to check out a newly opened carousel in Manhattan. We picnicked in a sculpture park on the East River. And, within days of moving from New York to Georgia shortly after Rider’s first birthday, we drove two hours to a special children’s event at Atlanta’s famed Georgia Aquarium.

Getting around this way made me feel more like my old, pre-baby self. And this time, I had a buddy by my side, or rather, in that once-discarded baby carrier.

Now, it’s four years later, and Rider has three younger brothers. Yep, I’m a mom to four boys, ages 4 and under. My philosophy of getting out of the house with each baby has continued to evolve.

Once preschool lets out for summer, I intend to take all four boys on a weekly adventure. I commend parents who take their babies on international trips. For us, for now, it’s the zoo, exploring a new town or checking out the sprinkler park.

There are many areas of parenting where I have a lot of room to improve. But my forte is not being afraid to load my kids into the car in search of a memorable experience — even when it means buckling and unbuckling four car seats multiple times.

I’m sure I would’ve realized this about myself whether or not that piece of plastic crashed onto Rider’s head while at the doctor. But it gave me the jolt I needed as a new mom to move past the fear.

I hope my actions teach my boys the perks of always being up for an adventure. And that while bumps, bruises, and worse could happen in the soundest of places, taking risks can be transformative.