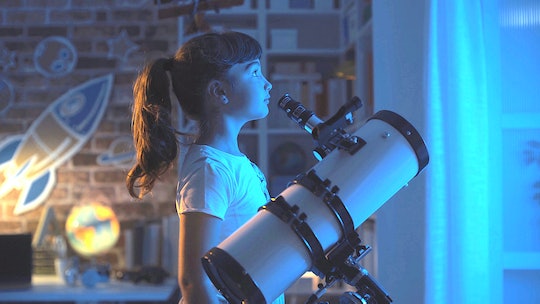 As summer winds down and the school year cranks up again, there's one big event in August that may give your kids a confidence boost for the months ahead. The Perseid meteor shower is coming, and it just might affect your kid in some interesting ways. A little stargazing could be just the thing to help your kid gear up for a new school year, because the Perseid meteors are a powerful and fascinating phenomenon.

One of the most popular meteor showers of the year, the Perseid meteor shower can produce 60 to 70 meteors per hour during its peak from August 11 through 13, as noted in Space.com. It should make a great show for 2018 in particular. "The moon is very favorable for the Perseids this year, and that'll make the Perseids probably the best shower of 2018 for people who want to go out and view it," said NASA meteor expert Bill Cooke in Space.com. As someone who watched this shower every year as a kid, it's definitely worth the effort, even if that means staying up a little late on a school night. It's special. Watching dozens of shooting stars at once is the sort of astronomical event that you will remember for a lifetime.

For people who are so inclined, there may be astrological significance to the Perseid meteor shower as well. The Perseid meteor shower is said to provide people with illumination for their path in life, making it easier to reach goals, as explained in the Elephant Journal. So if your kid has been struggling with some particular issue lately, perhaps this time will give your child some clarity. In many ways, this is a good time to help steer your kid in the right direction, whether that's in school, activities, or family life.

This is also an ideal time to overcome fears, at least astrologically speaking. Whether your kid is dealing with some back-to-school jitters or other fears, it's the perfect time of year to be brave. "As the Perseids meteors seem to dance along the blade of Perseus’ sword, we are shown that sometimes it is necessary to confront our fears for they can become our greatest strengths," said renowned astrologer Leah Whitehorse in LUA Astrology. Whether your kid is worried about peer relationships or a particular class subject, you can say that bravery is basically written in the stars this month. Hey, everyone needs a little inspiration when it comes time to face your fears, so why not point to this awesome meteor shower? The idea just might help your kid brave those first hectic weeks of school.

For the youngest kids, you can simplify the mystical side of the Perseid meteor shower entirely. Just use this yearly shower as the perfect reason to wish upon a star. If you're lucky, you and your kid will see enough shooting stars to carry your every wish. Whether your kid is facing down the toddler years or coping with intense school stresses, consider pointing to the Perseid meteor shower as a reason to feel brave.