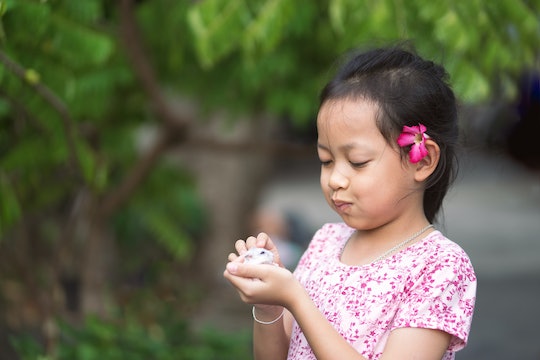 The Pet Kids Love Owning Over Cats & Dogs, According To New Research, Might Surprise You

For generations, the go-to question to determine a person's true personality has been the simple, but telling: Cats or dogs? But now, it seems that the world needs to prepare to add a third option into the mix. According to a new study, there's a pet kids love owning over cats and dogs and it might surprise you.

If you really think about it, pets in general are kind of weird. There's an animal that kind of chills in your house as you bond with it. I'm a cat person, but even I will admit there's something strange about owning an animal that just kind of stares at you from various points of your house. All of this is to say, knowing how weird the concept of pets are in general, don't judge kids today.

The average American might assume that RightPet concluded cats or dogs were the type of pets that gave kids the most satisfaction, but nope. As broken down by People, based on 5,150 reviews from 74 countries, adults and kids who owned animals between the ages of 10 and 17 reported the animal that gave them more satisfaction than any other pet was... a rat.

There's no complaining about small sample sizes here. The study was conducted online between 2010 and 2018, according to the research noted by RightPet, and ended up surveying a total of 16,792 people from more than 100 different nations.

RightPet outlined five measurements they used in the survey: animal demographics, overall satisfaction with the animal, owner demographics, owner personality, and owner attachment. But why do kids prefer rats? Outside of citing that owners found "great satisfaction," the study wasn't clear, but there are actually plenty of reasons why that might be the case.

First off, rats aren't dirty, according to Pets4Homes. That's generally the first concern people have, but Vet Street explained that rats are actually super-clean. They don't enjoy getting dirty, according to Vet Street, and will groom each other, organize their food into piles, and clean themselves immediately.

Because of that, they're lower maintenance than most dogs who need regular baths. According to Vet Street, typically the only rats that need regular bathing are "older, obese, ill or arthritic rats that have difficulty grooming themselves, or unaltered males that mark their territory with urine."

Rats are also very intelligent and empathetic, according to Metro. And they can actually be taught tricks, according to PetMD, such as shaking hands, coming when called, and jumping through hoops. Also, their empathy has been noted in studies, such as one that found rats will even forsake chocolate to save another rat, as Science reported. That level of empathy transfers into the bond between pet and owner, obviously making them attractive to children.

They're also generally cheap. The Animal Humane Society, for example, lists the cost to adopt small animals, including rats, between $5 to $164 dollars. However, rats are social animals and do need to live with another rat companion, and they also require a large cage with bedding and some stimulating toys, according to the Animal Humane Society.

The one big downside to rats is their short lifespan. On average, pet rats will live between two to three years. That can make owning rats extremely difficult for families with young children who probably won't be able to handle their companion passing away so fast.

Clearly, though, plenty of other kids are getting all the enjoyment they can from pet rats. No matter what the pet happens to be, it's always awesome to see kids getting to bond with another creature. It definitely helps remind people that we're not the only living things on this world and there's a lot of ways to show kindness to our animal friends.

And who knows! Maybe, in the future, pet rats will become so common that these results wouldn't surprise anybody. Only time can tell!

More Like This
David Harbour Transforms Into A Santa No Kid Wants To See In 'Violent Night'
Festive Mommy & Me Holiday Nail Ideas To Try
If Your Kids Love Their Elf, You Don't *Have* To Put Him Away On Christmas
Spread Some Christmas Cheer In Your Child’s Bedroom