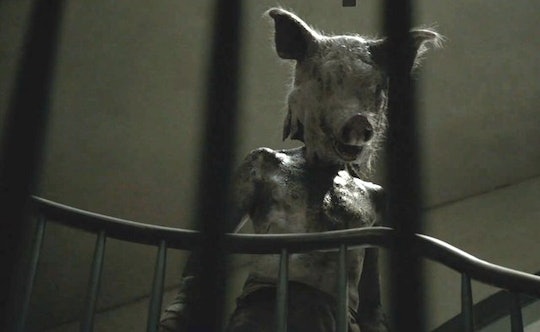 The Piggy Man’s Backstory Is Revealed On ‘AHS: Roanoke’ & It's Incredibly Disturbing

There have been so many villains throughout the sixth season of American Horror Story. The Roanoke land has been terrorized by the Butcher, Scathach, Edward Mott, a very human Agnes, and an assorted collection of ghosts. But of all the terrifying antagonists, we've known the least about the mysterious Piggy Man, whose identity remained a secret – until now. With "Chapter 8," the Piggy Man's backstory is revealed on American Horror Story: Roanoke and it's just as horrifying as we expected.

Season 6 of AHS seems to have had a record high number of killers. The real Butcher has the highest body count that we've seen so far, but she's far from the lone murderer. Based on the Roanoke lore we've learned and what we've seen borne out, each of the Butcher's victims have effectively been conscripted as her minions – they've inflicted damage of their own, but because of her. Ironically, Scathach (the "b*tch with the real power," according to dearly departed Cricket) has killed relatively few people (onscreen, at least).

Over the course of the season, we learned all about the Butcher's backstory as well as Scathach's, courtesy of "My Roanoke Nightmare's" dramatic re-enactments – though, in retrospect, who knows how much of those backstories were true and how much were fabricated by Sidney and his crew? Somehow, we made it all the way to the eighth episode of the season knowing virtually nothing at all about the Piggy Man, one of the season's most iconic and enigmatic villains.

On "Chapter 8," we finally discovered an important piece of information about how the Piggy Man came to be as well as his real identity. While casually chatting with a tied up and sliced up Lee at the Polk farm, Jether Polk (Finn Wittrock) revealed that the Piggy Man was his ancestor, Kincaid Polk. Kincaid, like the rest of the Polks, was a pig farmer. Inspired by the Butcher's affinity for putting a pig head on victims and roasting them, Kincaid decided to start adorning himself with a pig head as well and began murdering people at the World's Fair, years back.

While we've yet to learn exactly how the Piggy Man came to be a ghost under the Butcher's probable control, at least now we know at least some part of who he is and how he came to be!