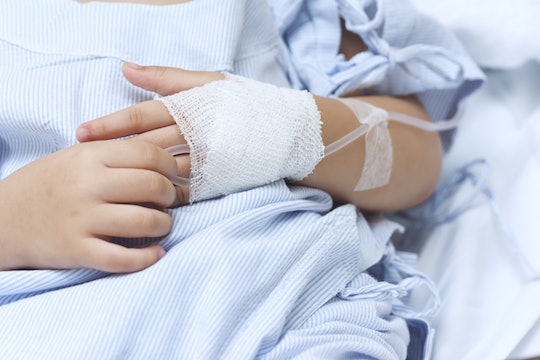 CDC: The Polio-Like Illness Affecting Children Has Now Been Confirmed In 22 States

In recent years, reports have been cropping up about a rare — and frankly, straight-up confusing — illness called acute flaccid myelitis. The worry? Not only did it seem to be primarily affecting children, but it was also causing some seriously concerning symptoms similar to those of polio, including paralysis. Perhaps the most worrisome part of all though? It actually appears to be on the rise. As The Washington Post reported this week, the polio-like illness affecting children has now been confirmed in 22 states, the Centers for Disease Control and Prevention has noted, and doctors are urging parents to be aware of the symptoms.

The CDC first began tracking the illness, called acute flaccid myelitis (AFM) in 2014, according to The Washington Post, and this year, there have been 127 confirmed or suspected cases in the United States so far. But even simply comparing only the number of confirmed cases, it still looks like 2018 has seen a pretty sharp increase from last year.

The good news, at least, is that AFM is still largely a very rare illness. According to the CDC, fewer than one in a million people in the United States get AFM each year. But with so much remaining unknown about AFM — coupled with the fact that the average age of those with confirmed AFM cases is only 4 years old, according to The Washington Post — it seems clear that parents should definitely have the illness on their radars.

Doctors still aren't sure exactly what is causing AFM in the first place, and it's also not clear how it's transmitted. Like polio, AFM affects the spinal cord and nervous system, and both can cause muscle weakness, paralysis, and difficulty breathing or swallowing. Yet according to the CDC, all of the confirmed cases of AFM since 2014 have tested negative for polio, and, in fact, the vaccine-preventable disease has long been considered completely eradicated in the United States, according to the Mayo Clinic.

It's possible that AFM could also be linked to other viral infections like enterovirus and West Nile Virus, according to TIME, though they haven't been present in all cases. And since there are still so many details unknown, it's also possible that "environmental and genetic factors" may be a part of the frustrating puzzle.

The lack of information that continues to surround the disease is likely to leave many parents feeling uneasy, and from the sounds of it, doctors and medical experts are feeling that way, too. But for now, it seems that the takeaway for parents is to remember that even with an uptick in the number of cases, AFM is still exceedingly rare. On the off-chance that you child does begin to show symptoms of the illness though? You're going to want to seek medical attention right away.

One major AFM warning sign to look out for is weakness in the arms and legs, according to the CDC, especially if it comes on suddenly, and without any apparent reason. Other symptoms to look out for include neck weakness, facial drooping, or difficultly swallowing.

Since doctors still don't know much about what's behind the virus, they also don't really know how it can be prevented, though the CDC does offer some valuable advice that may at least somewhat reduce the risk.

Due to AFM's similarity to polio, parents should ensure that they and their children are fully vaccinated, and they should also take steps to prevent mosquito bites as much as possible, since mosquitoes can carry West Nile Virus. That includes using an EPA-registered insect repellent, wearing long sleeves and pants, staying indoors when possible, and ensuring windows and doors have screens on them to prevent mosquitoes from getting in. And though it's not clear if it will actually help prevent AFM specifically, the CDC also recommends thorough and regular hand washing, since it's effective in general at reducing the transmission of illness.

The fact that AFM is still a very rare disease should give parents *some* peace of mind, though knowing that it's still a possibility — and one that still has more questions than answers — is certainly unsettling. For now though, it seems that common sense prevention strategies, along with a general awareness of AFM warning signs, are the best way to go, until more light can be shed on what's actually going on.