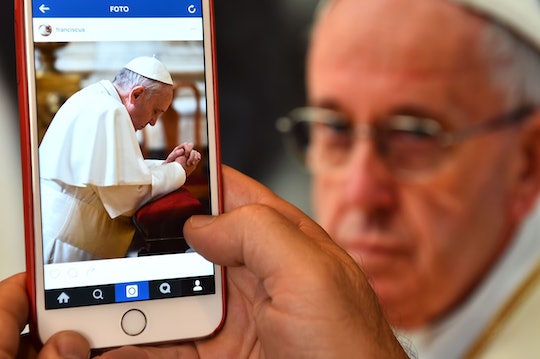 It was bound to happen sometime. Pope Francis joined Instagram and his first post was a call to prayer yesterday. Although I appreciate his sticking to business, he's like the one person whose brunch pictures or Sunday morning walk pics I would actually like to see. Alas, touristy shots of Vatican City and pics of creamy Roman pasta are nowhere to be seen. Pope Francis is taking this thing seriously. On Instagram, he just asked followers to pray for him, in nine different languages. Just afterwards, he took to Twitter to let people know he on to this social media thing. He wrote, "I am beginning a new journey, on Instagram, to walk with you along the path of mercy and the tenderness of God."

I hope he doesn't think that Instagram has anything to do with tenderness or mercy. The Fat Jewish or Miley Cyrus' feed might shock the man. Some of the most followed Instagram accounts are members of the Kardashian and Jenner clan, Justin Bieber, and Nicki Minaj. The Pope might be in for some surprises on his new journey. Soccer celebs like Leo Messi and Cristiano Ronaldo are also among the most followed — that sounds like it could be more up the leader's alley.

Instagram CEO Kevin Systrom was there to help the Pope create his first post. He wrote that he was happy to have the Pope on board,"Watching Pope Francis post his first photo to Instagram today was an incredible moment." He welcomed the him to the "Instagram community" and added that he hoped his messages of "humility, compassion, and mercy" would leave a lasting mark. I wouldn't be expecting too many selfies. The Pope has apparently been interested in Instagram for a while. Last month, Instagram gave Pope Francis a book of photos from the network that included 10 historic moments.

According to The New York Times, the Pope's Instagram account will be curated, like his Twitter timelines, by the the Vatican's social media department. The Pope's account, @Franciscus, will be separate from the Vatican's official account. This one will be used to show "aspects of closeness and inclusion that Pope Francis lives every day,” according to an official statement from Monsignor Dario E. Viganò, the prefect of the Secretariat for Communications for the Vatican.

Pope Francis' Instagram account has already accumulated 300,000 followers at the time of writing. That's sure to increase. His Twitter account has over 8 million followers. But the Pope isn't into counting. He spoke last year in Pennsylvania of the dangers of consumerist culture and chasing trends or followers on social media, instead of focusing on connecting with people.

It's a sign of how important social media's is in our daily lives if the Catholic Church has their own social media department. But Pope Francis already has a reputation for being the "cool" Pope. Snapchat is just around the corner at this point.