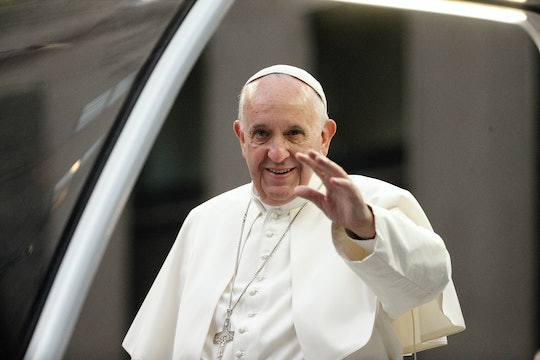 The Pope Responds To Trump's Wall In The Best Way Possible

Billionaire business mogul and GOP presidential hopeful Donald Trump, tired of attacking junior senators and disabled reporters, has set his sights on a new nemesis: Pope Francis. CNN reported Thursday that the pope responded to Trump's idea of a wall along the United States' southern border (to keep Mexicans out, naturally) by saying that "a person who thinks only about building walls, wherever they may be, and not building bridges, is not Christian." Shots fired!

"This is not in the gospel," Pope Francis then added. Of course, Trump couldn't resist responding to the comment, posting a vaguely threatening post on Facebook.

"If and when the Vatican is attacked by ISIS, which as everyone knows is ISIS’s ultimate trophy, I can promise you that the Pope would have only wished and prayed that Donald Trump would have been President," Trump boasted. (Because he wants to build a wall around a city in Italy as part of his U.S. presidency? I'm confused here.) Trump also said that "no leader, especially a religious leader, should have the right to question another man’s religion or faith." Some might argue that the Pope is the boss of Christians, so maybe that's kind of exactly his job, but then again, Trump claims to be a Presbyterian, so perhaps he just does recognize the Pope's authority.

So is Trump a "real Christian?" It's been called into question before. He was recently mocked for referring to the eighth book of the Bible as "Two Corinthians" rather than "Second Corinthians," according to Business Insider. And he even inspired a Twitter meme called #TrumpBible last August when he was unable to name his favorite Bible verse, even though he claims that it's his favorite book. The Washington Post has a great roundup of some of the best entries to the "Trump Bible," such as "Then He will also say to those on His left, 'Depart from Me, haters and losers, into the eternal fire, which is Mexico'" and "Judas? Bad leadership on Jesus' part. Would never have happened on #CelebrityDisciple."

And here's a fun fact about Trump that I never get tired of musing about: He's got a room full of Bibles that he refuses to throw away. In a 2011 interview with the Christian Broadcasting Network, Trump said that a lot of people send him Bibles, and "[t]here’s no way I would ever throw anything, to do anything negative to a Bible, so what we do is we keep all of the Bibles."

Think about that for a moment. If someone, anyone, were to mail Donald Trump a Bible, he would keep it forever. That means that theoretically, if one had the resources to commission a special edition of the Bible with a poop emoji embossed on the cover, and an inscription inside that referred to Trump as, oh, I don't know, a "loser," or a "moron," or a "bag of dicks," say, and then mailed it to his gold-plated apartment, he'd be compelled to keep it. Just something to think about.