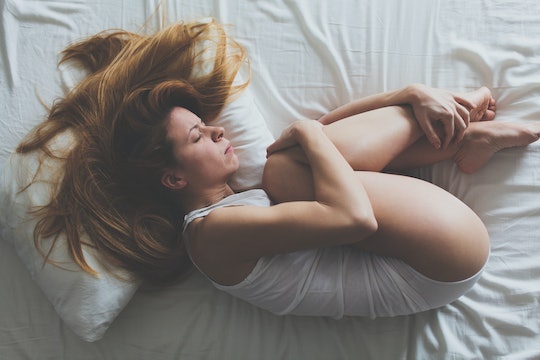 No One Prepared Me For My First Post-Baby Period

Well, it’s finally happened. The day I was dreading arrived. After two years, 11 months and three days; after pregnancy, breastfeeding and extended breastfeeding, the day of reckoning was upon me: I got my first post-baby period. Yes, I was without it for way longer than the average new mother and I should be grateful. Yes, having a period is a healthy, normal thing for women to do. But guess what? I’m having a lot of feelings about this bloody situation. And all of these feelings are bad.

The badness began even before the blood started to flow. I’d felt horrible for a few days — lethargic, cranky and even a little dizzy. But since my co-workers were being taken out one-by-one by a nasty super flu, I naively assumed I was just going to be the next victim of the virus. That was until my favorite pair of underwear was suddenly awash in a crimson tide. Never had I wished for an upper respiratory tract infection so badly.

Basically, I felt like I was pregnant again, only this time with a spasming alien trying to tear itself out of my body by any means necessary

Because honestly, I find getting my period annoying enough. But getting my period for the first time after an almost three-year hiatus was pretty much the worst thing to happen in 2017. (OK, maybe some worse things happened, but this was pretty bad, too.) And that’s because a trifecta of extreme feelings came along with Aunt Flo’s visit, making it the most disappointing surprise since election day 2016.

First up: the physical feelings. During those two years, 11 months and three days that I wasn’t menstruating, my body was apparently hoarding up all the period and PMS symptoms it could, only to release them into my body the moment my uterus jumped back into action.

In the first three days back riding the cotton pony, I simultaneously suffered from the following: bloating so bad I went up a pants size, nausea so intense I had to leave work early, aching in all my reproductive organs so acute I could have traced a perfect outline of my uterus on my skin, cramping everywhere including my vaginal barrel, which I didn’t think was possible, constipation and diarrhea (they traded places every hour or so), insomnia, crankiness, exhaustion, wooziness, flakiness (which is different from wooziness because you are letting people down), depression, acid reflux (that was new!), and a total inability to eat anything besides chocolate like a ‘90s sitcom character. And for some reason, my sense of smell went into high gear, so everything from my workmate’s vinegary salad dressing to my kid’s wet diaper made me super-gag.

Basically, I felt like I was pregnant again, only this time with a spasming alien trying to tear itself out of my body by any means necessary and that alien was actually my uterus. It was unpleasant. Really, really unpleasant. But happily, some rest, Midol and a box of red raspberry leaf tea finally helped my hormones to calm the fuck down.

Which brings me to the second terrible feeling: total confusion about how to actually deal with having my period. You may have noticed me going on about the two years, 11 months and three days timeline, but the truth is that before I got pregnant with Mabel, I’d been pregnant and then nursing her brother Harvey for two years and 11 months before my period came back briefly, only to be quickly banished by my second pregnancy. So, really I’ve not had to deal with tampons or pads for five years in total (AKA the best five years of my life). And apparently, half a decade of time off compounded by my permanent mommy brain makes for a pretty steep learning curve when it comes to remember how tampons work…

I briefly considered ditching tampons all together and buying a Diva Cup, until I realized that I now had a post-birth super-sized vagina and would need the larger Model 2 “Recommended for women age 30 and over and/or for women who have delivered vaginally…”

How often do I need to change a tampon? Do I change it every time I pee? I know some people don’t, but do I? How many tampons do I need in a day? Four? 100? Do I carry a tampon in my hand to walk across the office to the bathroom or put it in carrying case first? What are the symptoms of toxic shock syndrome? Am I experiencing those symptoms right now? Why am I crying so much?

Then there were the little, idiotic mistakes I kept making, like forgetting to pack tampons to bring to the office. That day, I spent the first 20 minutes of work breaking into the dispenser in the woman’s room. (It was sort of broken already, sue me.) Then there were the two more pairs of good underwear lost because I had forgotten to use back-up pads for my heavy flow days. I also forgot I had heavy flow days. They were horrible.

I briefly considered ditching tampons all together and buying a Diva Cup, until I realized that I now had a post-birth super-sized vagina and would need the larger Model 2 “Recommended for women age 30 and over and/or for women who have delivered vaginally…”, and I literally don’t have the mental energy to deal with that right now.

I want my two kids to be babies again. And those days are over. They are over forever. Unlike my period, which is here to stay. Ugh.

But beyond the physical pain and the exhausting maintenance work, my newly reclaimed menses brought out even deeper feelings. Feelings of melancholy. My youngest kid, Mabel, is 2 years old; officially a big girl. Obviously, this makes me proud. She’s incredible: fierce, funny, and cuddly like a bunny. But on the flip side? I’m devastated because those squishy baby years are over. Worse, my husband and I are not planning for any more kids, so I’ll never get to hold a new tiny newborn in my arms again. That fact is way more painful than a little acid reflux and a bloated belly.

Although, if I’m being real, I don’t want another baby. I want my two kids to be babies again. And those days are over. They are over forever. Unlike my period, which is here to stay. Ugh.

Ultimately, I’m in mourning for what were my favorite years — at least cuddling-with-babies-and-not-bleeding-out-of-my-vagina-once-a-month-wise. But, watching my gorgeous children play and dance and sing gives me hope that there may still be some fun times ahead too. I’ll just have to enjoy them with a massive supply of tampons under the bathroom sink.

At least I have menopause to look forward to!

More Like This
How To Breastfeed A Baby With A Cleft Lip Or Cleft Palate
Breastfeeding Twins: Everything You Need To Know
21 Earthy Baby Girl Names For Your Little Force Of Nature
20 Perfectly Proper Tudor Baby Names