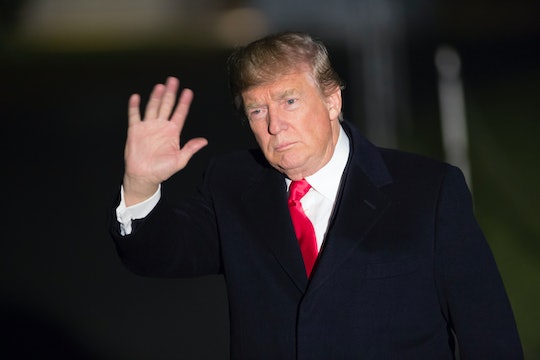 Apologies in advance if you've tried to limit your Trump-related news recently for the sake of your sanity, but this is one move that he's made that you need to be aware of. President Donald Trump greatly reduced the size of two national monuments in Utah on Monday, selling the largest amount of public land in United States history. This has obviously drawn the ire of his opponents, as well as several environmental groups, and a few more unlikely dissenters have raised their voices in opposition to the move as well. But parents are also concerned, because the elimination of public lands doesn't just affect people in the here and now — it impacts future generations too.

Trump's order was met with lawsuits from environmental and conservation groups, according to ThinkProgress. Tribal groups oppose the move as well, and Native American leaders vowed to take the fight to court to preserve lands that they consider sacred, The Chicago Tribune reported.

The move is so bad that a different kind of opponent has emerged in this fight, too. Patagonia, an outdoor recreation retailer, made its website "go dark" on Monday night, except for a message opposing the move and making visitors aware of what had happened.

But parents shouldn't leave pushback to environmental groups and businesses that have already committed to conservation causes. The truth is, the loss of public lands hurts kids, too.

Public lands and national parks and monuments are meant to preserve some of the most beautiful features in this country, and it's a huge shame to deprive kids of that for the sake of destructive development, including possible oil and gas extraction, mining, and logging.

Former president Theodore Roosevelt, who is often called the "conservationist president," may have put it best when he wrote, according to the National Park Service:

It is also vandalism wantonly to destroy or to permit the destruction of what is beautiful in nature, whether it be a cliff, a forest, or a species of mammal or bird. Here in the United States we turn our rivers and streams into sewers and dumping-grounds, we pollute the air, we destroy forests, and exterminate fishes, birds and mammals -- not to speak of vulgarizing charming landscapes with hideous advertisements. But at last it looks as if our people were awakening.

Which is pretty much the opposite attitude of how Trump seems to feel about the situation. According to The New York Times, Trump's focus with this latest move is instead on fostering "a bright new future of wonder and wealth," presumably by allowing that destruction of beauty that Roosevelt wrote about for the sake of commercial interests.

Besides the idea that we should work to preserve public lands just so future generations can enjoy them and their beauty, there are some compelling arguments that can be made about the impact that being in nature can have on kids.

But currently, the average American child is said to spend just four to seven minutes a day in "unstructured" play outside, thought they spend more than seven hours a day in front of a screen, the Child Mind Institute reported. Most studies agree that children who play outside are "smarter, happier, more attentive, and less anxious" than those who spend more of their time indoors, according to the Institute.

Based on the health advantages alone, parents should be interested and involved in saving public lands for their children to continue to enjoy well into the future. Preserving access to nature via public lands — especially because of the advantages for kids who spend time outdoors — is a fight we should be a part of for the sake of all kids, no matter how tough the fight may be.