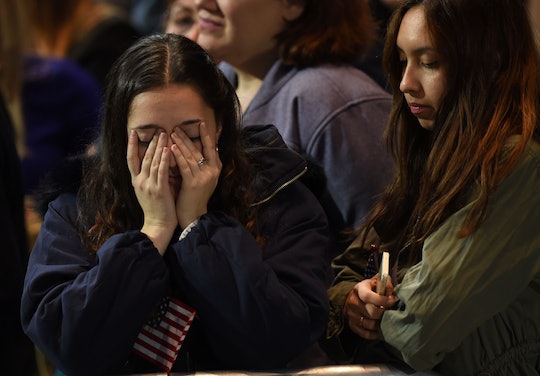 The Problem With Calling Women "Sore Losers" In This Election

Watching a candidate you had supported and believed in for months concede a presidential election is always hard. It was even worse this time around when a woman who worked tirelessly for the presidency from the ground up lost to an over-privileged, severely under-qualified man who decided to try out politics for the first time ever at the age of 70. This was a reflection, albeit on a supremely large scale, of the every day injustices women face. Trump's victory was painful, yet, in some ways, unsurprising. Women have every right to be upset that this man was chosen by our fellow citizens to lead our country, yet we've had to deal with being called "sore losers" since the election — and the problem with calling women sore losers in this election is that it aims to invalidate our experience as females in this country, as well as minimize the severe effects a Trump presidency will have on us.

Women in the United States are still paid less than men for the same work, are constantly overlooked for promotions if they're planning on starting a family, and stand up to fight again and again for the rights to their own bodies. Hillary Clinton was a champion for women, outlining detailed plans on how she would make this country a fair and equal space for us. President-elect Trump, on the other hand, was voted into office after describing how he could grab us by the pussy anytime he wants. If he thought that back in 2005, imagine what he thinks he can get away with now. His election was devastating for women because his presidency will have real, lasting, and damaging effects for us.

Merriam Webster defines a sore loser as "a person who becomes very upset or angry when he or she loses a game, contest, etc." The election was not a game or a contest. It was a democratic process in which the results have real consequences for people in our country. Women are not upset because they didn't win, they are upset because they know what the reality of a Trump regime means for them — and especially for minorities — and they are frightened. Not only are they facing at least four years lead by a man who has called women "dogs," "pigs," and made fun of our menstrual cycles, there is a very real possibility they will lose basic rights that their sisters, mothers, and grandmothers fought so hard for. Calling women "sore losers" for speaking out against sexist threats is actually a pretty common mechanism used to invalidate our opinions and emotions — look no further than social media if you don't believe it.

The Washington Post points out that language is often used to undermine women's emotions:

Women hear it all the time from men. “You’re overreacting,” we tell them. “Don’t worry about it so much, you’re over-thinking it.” “Don’t be so sensitive.” “Don’t be crazy.” It’s a form of gaslighting — telling women that their feelings are just wrong, that they don’t have the right to feel the way that they do. Minimizing somebody else’s feelings is a way of controlling them. If they no longer trust their own feelings and instincts, they come to rely on someone else to tell them how they’re supposed to feel.

Call us sore losers all you want. We're not listening. We're too busy speaking up. We're organizing. We're donating to Planned Parenthood in Mike Pence's name. We're planning our Million Woman March in Washington D.C. following Trump's inauguration. We're doing what Hillary Clinton wants us to do: We're continuing the fight for what is right. We're fighting for equality, not just for women, but for everybody. If that makes us sore losers, so be it. We got called nasty once, too, and now we have cool t-shirts.