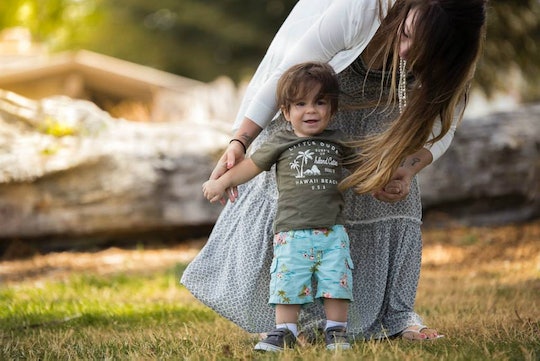 The Problem With Saying Motherhood Is Beautiful

When my partner and I announced our pregnancy to the shocked and surprised masses, I received one resounding response, regurgitated over and over and over again: "There’s nothing more beautiful than motherhood." Though I appreciated the sentiment at the time, I’ve come to realize, as the mother to a now-1 year old, that everyone was lying. Stone cold, lying liar faces. Everyone. All of them. Motherhood is not, in fact, beautiful. Not all the time, anyway. Sometimes motherhood can be ugly.

I constantly examine my parenting abilities, then weigh them against others, horrified and ashamed at the thought that someone could be doing a better job than me.

Motherhood has left me, more often than not, feeling powerless. As my toddler bites my leg and hits my face — out of some frustratingly primal instinct he can't seem to deny — I'm stuck in a battle between outright rage and the inability to forcefully punish. In those moments I hear the voices of those who advocate spanking, but I feel the burn of every slap I've ever endured, and then I'm stagnant, unsure of what to do.

Motherhood has made me jealous. Being away from extended family has made it impossible at times to score free babysitters. In times where we haven't been as financially stable as others, my partner and I have found ourselves annoyed by pictures of family trips friends have posted from their overseas vacations, or new, popular toys or expensive, never-worn clothes they've purchased. I constantly examine my parenting abilities, then weigh them against others, horrified and ashamed at the thought that someone could be doing a better job than me.

Motherhood has made me, at times, cruel. I was once patient and kind and understanding, but now I become frustrated and agitated and intolerant at the drop of a hat — sometimes faster. I'm quicker to confront people who seem to disprove of my parenting tactics or my son's behavior. There are times when I'm unable to handle another tug of my pant leg or annoying whine when I'm trying to finish a deadline or answer a work call. Even though I just need a break sometimes, I keep the day-to-day struggles and tiny, detailed annoyances inside until they become so overwhelming that I'm left with a short fuse and an even shorter temper.

Motherhood has left me unattractive — emotionally, mentally, physically. For 10 months, I forfeited control of my body, stretching and craving and contracting in ways I didn’t know I ever could. I was encouraged to experience this complete internal takeover as a “gift” or a super power or a wonder straight from Mother Earth, but really, I was exhausted and nauseous and consistently uncomfortable. It’s unbelievably difficult, you know, to feel like you don’t fit inside your own body, to feel like a stranger walking its halls. And when I did speak up, when I complained or fussed or wished my baby would just come out already, I felt like I was acting ungrateful and vain.

Motherhood has left me exhausted beyond all possible comprehension. I might have pulled a few all-nighters in college, and I may have worked two or three jobs simultaneously, but life with a kid is a horrific and painful thing to ask of your body. I constantly felt like I was outside of myself, teetering between reality and an unconscious hell of abstract miscommunication. Deodorant was mistaken for toothpaste. Conditioner was mistaken for body wash. Eating never seemed as important as 30 minutes of uninterrupted sleep. Crying felt like a welcomed break from the vigilant existence I had been propelled into.

Having a child rearranged my priorities so much so that a few stains on my sweatshirt appeared reasonable and three days without a shower sounded acceptable. Everything society had convinced me to care about regarding my appearance no longer mattered. Until I found my bearings and settled into a routine, I only cared about getting through each day with a healthy baby and a shred of sustained sanity.

And right when I'd think I was done, when motherhood couldn’t possibly get any uglier, with its doubt and jealousy and exhaustion and frustration and unattractiveness, I'd experience a beautiful moment. My son would put his small, ineffectual arms around my neck and squeeze, hugging me like I was the only one who could possibly comfort him. I'd watch him crawl for the first time or walk for the first time or learn a new word for the first time, and I'd be in awe of human beings and their ability to learn. I'd kiss the top of his head or stare at his innocent face, OK with the decisions I'd made that somehow led me to him.

After becoming a mom, with all its twists and turns and ebbs and flows, I realized that I didn't need a never-ending buffet of butterflies or constant sunshine and delightful fulfillment. All I needed were those small, beautiful moments to remind me of my purpose: that all of the decidedly not beautiful moments are in the service of something more profound, and you can't always have profound and fun at the same time. Maybe I'd have realized it sooner if we didn't keep going the myth that it's all sunshine and joy and unicorns for every woman who bares a child.

I know many women who've relished in their roles as mothers, finding joy and sunshine and sparkles in every single moment. Their experiences are valid and important, but their experiences don't belong to me. What's mine is realizing that welcoming a child into my world has not arranged itself into the picturesque maternal fantasy I'd spent so long dreaming of — and that's OK. It's OK to just be beautiful some of the time.

More Like This
Ginger Zee Had A Perfect Response After A Troll Asked Her "Who's Raising Your Kids?"
It's A Beautiful Day In Jenny Slate’s Neighborhood
35 Relatable Quotes That Prove Being A Mom Isn’t Easy
30 Kitchen Mistakes You’re Probably Making (& How To Fix Them)