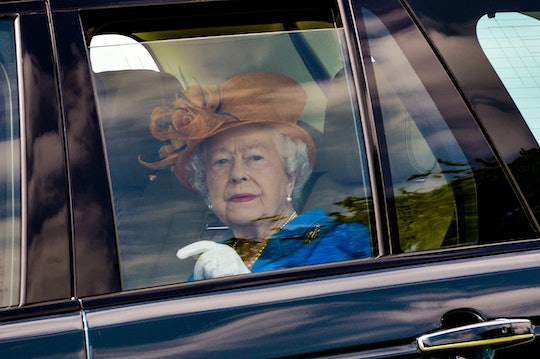 When a show or a film comes along that tackles the lives of very real people, it's natural to be curious about how those people respond to their story being told – especially if they're not hands-on in the creation process. Netflix series The Crown explores the life of one of England's longest-reigning monarchs, Queen Elizabeth II, who is still wearing hats and collecting corgis, very much present to witness her life turned into an acclaimed series. Critics and fans responded favorably to the fictional take on her life, but many may have wondered just what the Queen herself thought of the series. Well, wonder no more – it looks like the Queen does watch The Crown, and she doesn't hate it.

In fact, it seems Queen Elisabeth is a fan of the show. While she hasn't said so herself or shared her opinion publicly, it's being reported that she enjoyed The Crown. A "royal source" apparently told Sunday Express that the Queen was encouraged to watch the series by her son Edward and daughter-in-law Sophie, the Earl and Countess of Wessex. Even more interestedly, the Queen allegedly holds casual viewing parties on the weekend at Windsor Castle, where the family settles in for a meal and a movie – or series like The Crown. "Happily, she really liked it, although obviously there were some depictions of events that she found too heavily dramatized," the source claimed.

The series has been positively received by other royal relatives who praised the production values and the acting. However, there's no telling if the love will last the longer the show goes on, especially as it intends to dive into murkier waters when it comes to the truth. It seems Season 2 will explore rumors that Prince Phillip had an affair by introducing a subplot about his infidelity. True or false, that information is certainly unconfirmed and likely won't be hugely pleasing to the Queen; I doubt anyone would want to be reminded of their spouse's affair in an internationally-aired reenactment whether it was based on reality or wholly made up.

While technically the Queen's opinion of The Crown is all conjecture (royal source or not, until a statement comes directly from her it's all questionable), it is a little reassuring to think that the show might have her stamp of approval. That makes it feel a little more real, like it actually does reflect the reality it's seeking to recreate. Whether that changes in the future is anyone's guess, but right now it's pretty cool.