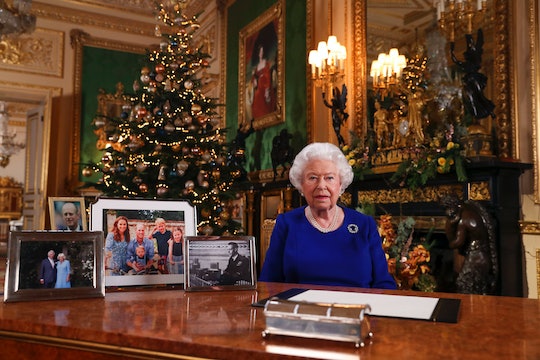 No, The Queen Didn’t Snub Meghan Markle & Prince Harry In Her Christmas Speech

The holiday season is upon us! And there is definitely no shortage of traditions when it comes to the royal family. Among the festivities are Christmas cards, holiday gatherings, and of course, Queen Elizabeth's annual televised speech. However, apparently the Queen's Christmas speech didn't include a photo of the Sussexes. And royal fans are jumping to all kinds of conclusions because of it.

But first, a little backstory is in order. After spending the past two Christmases with the royal family, Prince Harry and Meghan Markle have opted to spend the holidays in Canada/with Markle's mother, Doria Ragland. The palace assured the public at the time that there are no hard feelings as a result of the Sussexes' holiday plans. "This decision is in line with precedent set previously by other members of the Royal Family, and has the support of Her Majesty The Queen." So all is good, and there is no family feud going on.

Or is there? Because in light of a new photo, many royal fans beg to differ.

In a preview of Queen Elizabeth's Christmas speech shared by the royal family on Monday, Dec. 23, representation of one branch of the immediate family is noticeably absent. The Instagram photo shows the Queen sitting at her desk while surround by framed photos of members of her family. Front and center is a portrait of Prince William, Kate Middleton, and their three children: Prince George, Princess Charlotte, and Prince Louis. You can also see a portrait of Prince Philip; one of Prince Charles and Camilla, Duchess of Cornwall; and another of Queen Elizabeth's father, the late King George VI.

Nowhere to be found, though, is a portrait of Prince Harry, Meghan Markle, and baby Archie. And royal fans did't hold back in pointing this out. One Instagram user wondered, "Meghan and Harry?"

Another person — who was apparently delighted by the "slight" — commented, "Oh my, this looks like Christmas shade being thrown and I love it. Merry Christmas to the most amazing Queen."

Yet another Instagram user declared, :Even the Royals deal with family drama during the holidays. BUT , very poor choice of photos. Wrong message being sent!"

Another person chimed in with an irreverent, "Oh that's savage Lizzy, savage!"

Still, others made a valid point in defense of the Sussexes "getting left out": The people included are all in the direct line of succession. One Instagram user commented, "Let’s not forget that the queen has other grandchildren as well and doesn’t have them shown either. Probably just showing the next in line."

Another person wrote, "For everyone saying she’s snubbed Harry and Meghan... she doesn’t have only two grandchildren and can’t include everyone, it’s clear she’s only included the line of succession and her husband. It isn’t a snub."

In case you're still searching for your holiday photo fix of the Sussex family, the family's 2019 Christmas card was actually released on Monday as well. See? Prince Harry and Meghan Markle are smiling, seem happy, and are enjoying time spent together. Not to mention, Buckingham Palace even went out of its way to reassure the public that the Sussexes spending Christmas outside of the UK is completely fine. All evidence points to there not being a royal family feud going on this holiday season.

What it boils down to is this: Yes, Prince Harry and Meghan Markle are spending Christmas differently than in recent years. But it's highly unlikely that their lack of photographic representation in Queen Elizabeth's annual speech is in any way connected.