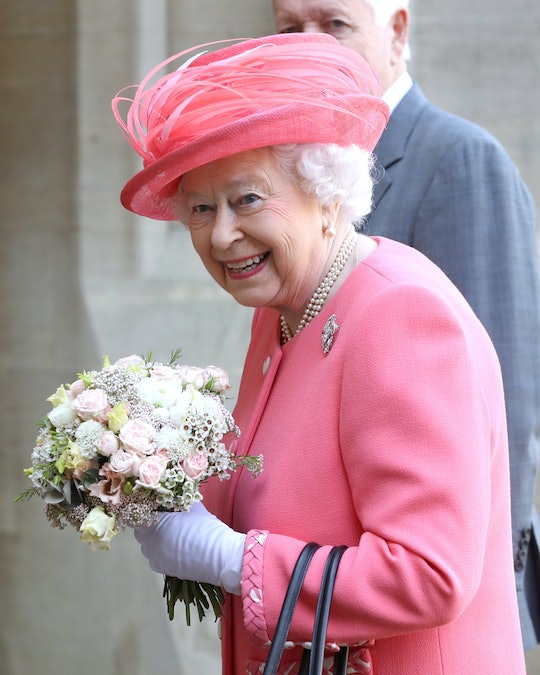 The Queen's Funniest Quotes About Her Great-Grandkids Are So Sweet

The world waited eagerly to catch the first glimpse of the Duke and Duchess of Cambridge with their newborn son, Prince Louis, on the steps of the Lindo Wing at St. Mary's Hospital following his birth Monday, and honestly, the moment certainly did not disappoint. But though the newborn's birth may have dominated headlines, few were likely more pleased by his arrival than the British monarch herself, Queen Elizabeth II. Though the royal family is steeped in tradition and formality, the Queen's funniest quotes about her great-grandchildren show that, when it comes to the youngest royals, the Queen seems pretty happy to go with the flow.

Being a member of the royal family has to be at least somewhat intimidating. Her grandchildren are expected to bow and curtsey to her in public, after all, and both Prince William and Prince Harry had to formally ask her permission before they could get married. But in some ways, it seems that the Queen isn't actually all that different from every other matriarch. While she doesn't speak often about her family in public, she has commented on her grandchildren and great-grandchildren from time to time. And while her official statements are always very formal, it turns out that her off-the-cuff comments are actually much funnier than you'd expect them to be.

She Knows How To Deal With Mischievous Youngsters

Earlier this month, British broadcaster ITV aired The Queen's Green Planet, a royal documentary about the Queen's love of nature, according to The Express. In one scene, the monarch stopped to admire the decorations on a nearby Christmas tree, and ended up sharing a clever parenting tip in the process.

Speaking to Neil Turner, the staffer who actually decorated the tree, the Queen joked that "the children love knocking [the decorations] off." Turner told her that his grandchildren love doing that, to which the Queen replied, "My great-grandchildren do — and even the grandchildren still. The great thing is to make them decorate it, and then they're a bit more careful."

She Responds To Some Hilarious Nicknames

If your great-grandmother happens to be the Queen, what exactly do you call her? Though being royal might involve plenty of complicated etiquette rules, it sounds like Queen Elizabeth doesn't mind her grandchildren and great-grandchildren calling her by some super sweet (and super funny) nicknames. In 2016, Catherine, the Duchess of Cambridge, revealed that Prince George actually refers to his great-grandmother as "Gan Gan," according to Hello! — which, let's be honest, is super adorable. But it might be Prince William who had the cutest name ever for the Queen.

As a tot, the Duke of Cambridge was once spotted at Buckingham Palace crying for "Gary," according to The Daily Mail. A guest assumed Gary must have been a member of the royal staff, until the Queen reportedly came along to pick up her grandson, and explained, "I’m Gary. He hasn’t learned to say Granny yet."

She Knows Who's Really The Boss

Prince George might be third in line for the throne, but from the sounds of it, it might just be Princess Charlotte who actually inherited the Queen's leadership skills. In January, the Queen met 10-year-old Emily Clay at Sandringham Estate, according to People, and asked her if she “looked after” her 6-year-old sister, Hadleigh. Clay's mom joked that it was actually "the other way around," to which the Queen replied, "It’s like that with Charlotte and George."

As much as the Queen might be a symbol of formality and old-fashioned British tradition, it also seems pretty clear that she's got a pretty great sense of humor — and, from the sounds of it, a real soft spot for her grandchildren and great-grandchildren. And while she may not open up about them often, when she does, what comes out of her mouth is pretty entertaining