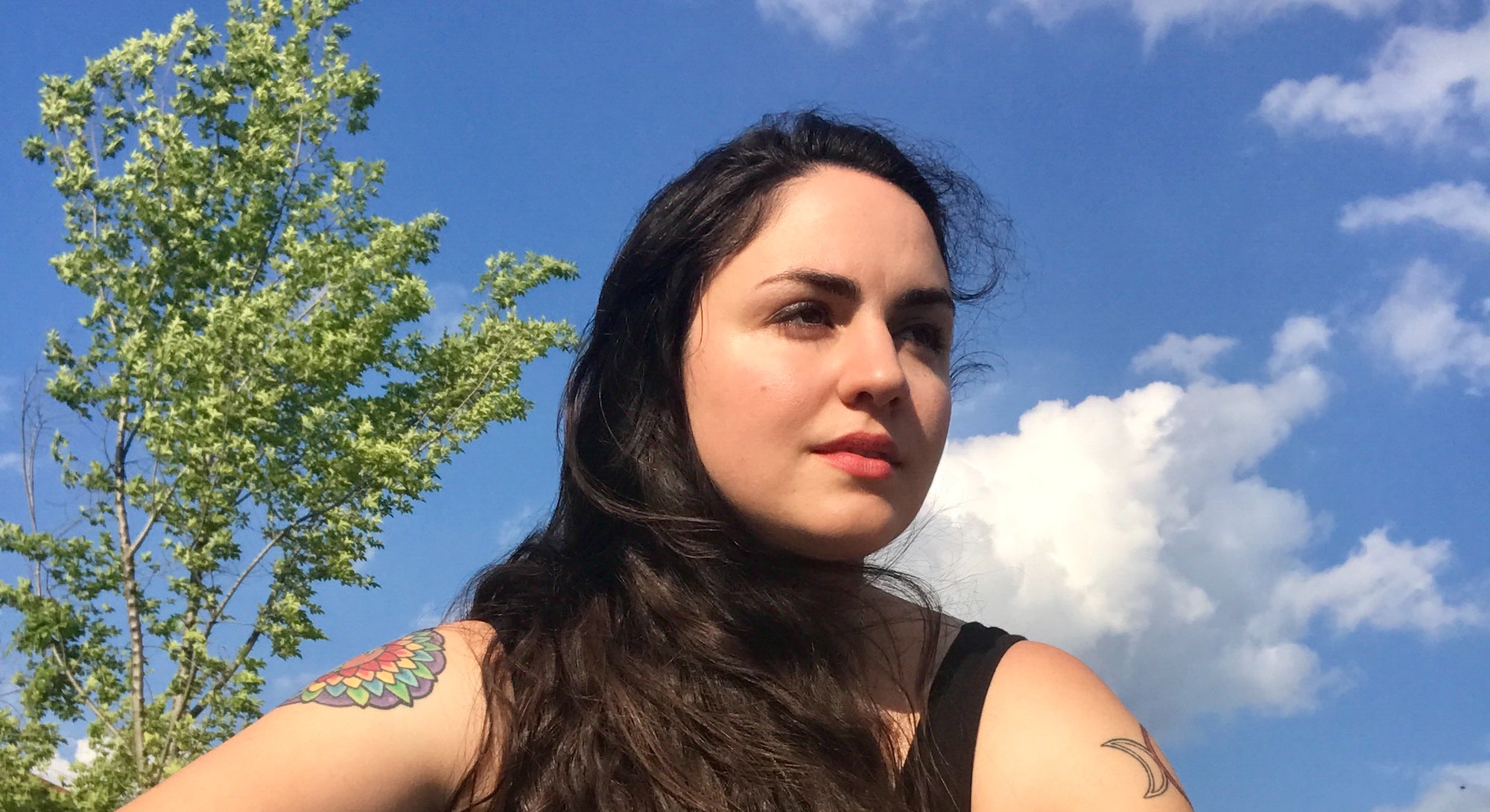 Not Just A Doula, But Someone Who Knows What You’re Going Through

Dr. Laura McGuire, a sexologist and full-spectrum doula, probably didn't consider the day she'd be known as a "Queer Doula," trained to provide support for people experiencing pregnancy, birth, and abortion, when she started her first teaching job at a Catholic-run charity for teen moms. All she knew, as a recently divorced mom-of-two who had just come out as lesbian, is that she was dedicated to providing inclusive care and reproductive education for everyone, regardless.

But in the confines of that charity ("My voice was very much controlled and edited to fit their agenda," Dr. McGuire wrote in 2018 in an essay for Spectrum South) she found her calling — a commitment to opening up the birth space to be more inclusive.

"There was one student in particular that really connected with me," Dr. McGuire, who has a doctoral degree in education, a credential commonly obtained by public educators, tells Romper via phone. "She disclosed at a certain point that she was lesbian and she had been raped." Dr. McGuire offered up numerous resources to the young teen ("Particularly about birth and pregnancy if you are a survivor of sexual assault, because that can be very, very different."), knowing she had a lot going against her.

"She was a student of color," she says, "in an area that's pretty much a resource desert."

Two months later, the director of the Catholic school found out the young teen's sexual orientation from other students she had discussed her circumstances with, and the teen was kicked out. She was eight months pregnant.

"That was in 2013, not 100 years ago," Dr. McGuire says. "It's still happening now. So that one student really, really motivated me to do more work around this."

"This," of course, being the work of educating and providing support for LGBTQ people experiencing birth, abortion, and pregnancy.

After leaving the Catholic charity, and later working at a school for at-risk teens, Dr. McGuire started working with young women who had abortions in middle school, high school students hoping to get pregnant and experiencing miscarriages, trans boys and men, and non-binary students and clients, all informing and shaping her approach to her work, and reminding her that choice is vital when a person is facing a variety of reproductive outcomes.

And everyone, regardless of their identity, gender, or sexual orientation, should have a choice, as well as access to factual, judgmental-free information that will best assist them in making the choice, she says.

In 2015, an analysis of data from a diverse cross-section of 10,000 New York City high school students surveyed in 2005, 2007, and 2009 found that pregnancies were more common among gay, lesbian, and bisexual youths than it was their heterosexual counterparts, per a 2015 paper published in the American Journal of Public Health. "Sexual orientation should be considered in future adolescent pregnancy-prevention efforts," concluded the authors. And that is exactly the kind of work McGuire is doing.

"It's helped me continue to be humbled by how diverse the human experience is," she tells me. "When I first got into it I was a lot more judgmental and thought there was a right and wrong way to go about certain things. And then, when I started to do the work — and asked my students and my clients about their experiences and what they wanted to share about what they needed and their life and what just wasn't working for them — that really helped me to say, 'Hmm, there are some things I think I know about life that are limited, that are just from my small world view."

Now that Dr. McGuire has gained real-world experience with a range of clients, she's better able to serve the people who don't often see themselves or their life experiences represented, or even understood, by the health care community at large, and certainly not by those who treat them during pregnancy, labor, delivery, and the postpartum recovery phase.

We need more people from the queer community, disabled community, different communities of color — all those populations to become doulas, to become providers in any of these arenas.

"There is just a different level, when someone has a similar lived experience, an identity, a sense of communion and relationship with each other, and I think a big part of it is that you don’t have to explain everything," she says. "When you’re with somebody has lived it — and we’re all individuals, so no one has had the exact experience but a similar experience — you don’t have to do 'Queer 101' with your health care provider or your doula."

Dr. McGuire says that kind of emotional labor is already exhausting, especially when someone is already going through something as taxing, physically strenuous, or as emotionally intense as labor and delivery, pregnancy, or an abortion.

That's not to say, of course, that allies shouldn't also serve the LGBTQ community, as Dr. McGuire makes a point of noting. "On the one hand, I don’t want people who are allies to think they can’t work with this community because they haven’t lived this experience," she says. 'Because we need allies in our community and there’s not probably going to be as many providers to match as many people who are out there. We need those allies. They’re very important."

Dr. McGuire thinks about the allies and the helpers and the people who have informed her work on the hard days, when she meets someone — either in a progressive space or a conservative space — who's resistant to the idea that personal experience impacts care. After a particularly harrowing experiencing during a class in which she was discussing the health equity and disparity for LGBTQ people at a local college — a participant ranted about trans women and how they're "tricking people" — Dr. McGuire couldn't help but feel defeated. "That day was really hard," she says. I was like, 'What am I even doing? I don’t know if I can help anybody. The world is too messed up."

In fact, the inverse is the case: if anything, the impact of violence against trans individuals is underreported. And what is documented is heartbreaking. Twenty-six transgender people died violent deaths in the United States in 2018, according to the Human Rights Campaign, a majority of whom were Black transgender women. In 2017, the FBI reported a 17 percent year-over-year increase in hate crimes, in which 17 percent of the reported victims were targeted because of their sexual orientation or gender identity.

If you're just searching in general for doulas or advocates, you're going to get people who can say, 'Sure, I can work with you' because they don't want to say no.

But then, Dr. McGuire says, there are the other days. The good days. "You meet people and go, 'Wow, I learned so much. I have so much to digest and think about, thank you for this.' And you're like, 'Ah. Alright, we're going to keep going. We got this.'"

Which is a perfect way to sum up not only Dr. McGuire's overall aura (she radiated positivity and happiness and the type of glass-half-full-ness that makes you truly believe you can push another human being out of your body, no problem), but her message to her clients and students: you've got this.

Dr. McGuire encourages pregnant people, especially LGBTQ people who are pregnant, to search online for specific doula resources. "If you're just searching in general for doulas or advocates, you're going to get people who can say, 'Sure, I can work with you' because they don't want to say no, but that doesn't mean they have specific experience or training on these issues and that's not going to be very helpful," she says.

And since we live in a connected society, Dr. McGuire also encourages those who don't have local options to reach out to someone online — they might be able to travel or meet via Skype.

Dr. McGuire never heard from or spoke to that young teen mom again, but she thinks of her often — she has undoubtably informed, and continues to inform, Dr. McGuire's queer, inclusive, LGBTQ-friendly, full-spectrum doula practice. The work she is currently doing isn't a far cry from her goal years ago, though, right after she gave birth to her second child and was going through her doula training.