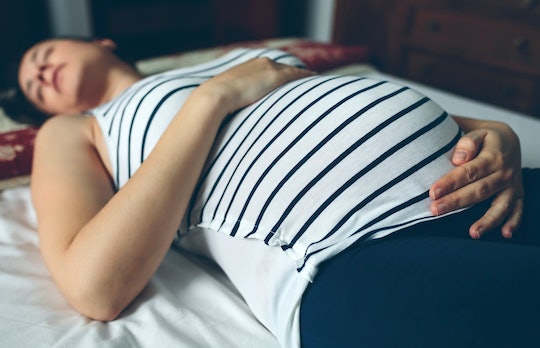 The Question Every Soon-To-Be Mom Wants To Know: Can I Sleep On My Stomach During Pregnancy?

When you're pregnant you're automatically inundated with a list of so-called "things you cannot ever do ever." Don't eat soft cheese, don't eat sushi, don't drink alcohol, and don't sleep on your back, for example, are all rules soon-to-be moms are supposed to live by. So if you're wondering what in the world is OK when you're pregnant, you're not alone. So let's start with the basics, because the following question is one I'm convinced every pregnant woman has asked herself: can I sleep on my stomach during pregnancy? Turns out, like almost every "suggestion" you'll hear as a pregnant woman until your child turns 18-years-old and leaves the house, it kind of depends. Welcome to parenthood, mom!

The underlying question about sleeping on your stomach while you're pregnant is usually tied to the idea that you'll somehow "squish the baby" if you sleep in the aforementioned position. While that assumption isn't entirely far-fetched, it's not entirely accurate, either. When you're in the early stages of pregnancy, there isn't any risk that you're going to "squish the baby." And when the baby starts to get bigger, sleeping on your stomach is going to be near impossible and very uncomfortable. According to New York OB-GYN Ashley Roman, MD, who spoke with The Bump, you'll likely roll over yourself in your sleep before you do any harm to the baby.

Overall, most pregnant women find that the best position for sleeping is on their side, usually because it's the most comfortable. According to the American Pregnancy Association (APA), "Sleeping on your left side will increase the amount of blood and nutrients that reach the placenta and your baby." To make sleeping on your side more comfortable, try sleeping with your legs and knees bent and a pillow between your legs.

Your sleeping position probably isn't the only thing that's going to start affecting your slumber when you're pregnant, though. In addition to feeling uncomfortable in your old sleeping positions because of your new body shape, you also might be dealing with things like heartburn, insomnia, back pain, and shortness of breath. Those don't sound terribly fun to deal with, but sleeping on your side can help with back pain, and propping yourself up with pillows can help with heartburn as well.

All those discomforts can contribute to pregnancy insomnia, according to the APA, which affects a staggering 78 percent of pregnant women. There are ways to help mitigate pregnancy insomnia, however, like getting regular exercise during the day, avoiding very long naps in the daytime, and relaxation techniques and changing sleeping positions.