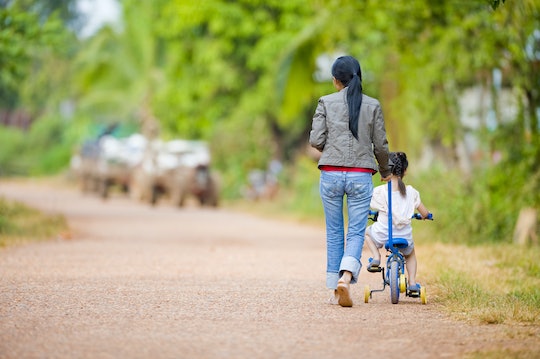 There is a certain amount of anxiety that comes with releasing your children into someone else's care, even if it is just for a little while. Losing control of your child's safety is hard, but knowing a bit about where your child is can make it a bit easier. The question this mom asks before playdates is so, so important and it could literally save your child's life.

Writer and mother-of-three Meredith Ethington penned an article on Scary Mommy where she discussed a crucial conversation that she has with parents before allowing her children to go to their house for a play date. She wrote:

I remember the first time I asked a parent I hardly knew, “Do you have any guns in your house?” it felt super awkward. I was convinced that she would think I was a lunatic, or a totally uptight parent, and that she was making mental notes to never let her child play with mine again. But I was surprised by her answer: “No. And I’m so glad you asked! I really respect that. Do you guys?” It started a conversation that was uncomfortable at first, but gave me peace of mind instantly.

There is good reason behind her needing that peace of mind, though. A recent study published in Pediatrics found that an average of 5,790 children in the U.S. visit emergency rooms for gun-related injuries each year. Additionally, researchers found that, on average, 1,297 children die annually from gun-related injuries. Those stats include intentional attacks, murders, and suicides, but they no doubt show the danger that improperly stored guns and guns obtained by those who shouldn't have them pose to kids. And, in her article, Ethington points out another important number: 77 children were killed in accidental shootings in 2016 alone, according to the CDC.

This number is at least partially explained by another shocking statistic from Parents: more than 1.5 million U.S. children live in homes with firearms that are loaded and not properly secured, according to another study published in Pediatrics. Researchers found that these guns were in locations easily accessible to children, such as in closets, in drawers, or under mattresses. Despite these numbers, Parents reported that few parents ask Ethington's question before sending their children off to a playdate outside of their own home.

Beth Ebel, M.D., a member of the American Academy of Pediatrics' (AAP) Council on Injury, Violence, and Poison Prevention, told the magazine that though it appears most parents keep guns safely stored, the numbers show that too many still don't:

Most parents who own guns are responsible about keeping them locked, unloaded, and stowed away safely. Yet nearly 40 percent of gun-owning households with children have an unlocked gun to which a child might gain access.

For these reasons, the AAP recommends that homes with children remain gun free and that parents ask the very question that Ethington wrote about. However, as Parents also pointed out, there are many loving families who keep guns in their homes — Ethington shared in her article that her childhood home had guns and she believes gun ownership to be a personal choice. But if you are part of one of those families, it is your responsibility to take every precaution you can to keep your children and the children who visit your home safe, which means storing your weapon in a locked safe, vault, or storage case.

For those of you who don't wish for your children to be around guns at all — regardless of how secure they may be — Ethington recommends that you just speak up:

You should never be afraid to ask about guns in the home of anyone your child visits. Family members, neighbors, and new friends are always at the top of my list of people to ask. But how do you start the conversation? Just ask. Most parents won’t think you’re ridiculous. And if they do, then maybe they aren’t the type of home you want your child playing in. I find that most parents want to keep their kids safe, and they want to keep your kid safe too.

After all, your peace of mind and your child's life are definitely worth a few minutes of potential awkwardness during the pre-playdate stage.