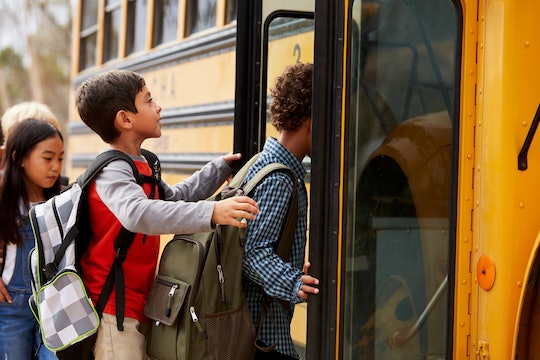 Meet The People Who Stopped 16 School Shootings, *Before* They Started

In today’s unwinding social and political climate, we most often hear about the tragedies, including the school shootings that occur seemingly every month. But those working to offer community-based solutions to school violence say that they have had success preventing incidents — success that does not hit the headlines in the same way that a tragedy might. And today, on the sixth anniversary of the Sandy Hook Elementary School shooting, the parents who’ve come together in its aftermath under the banner of safe schools want to focus on the impactful work they’ve been doing; preventative work that starts early, and can be as simple as maintaining a good connection with your child. In the words of Michelle Gay — who lost her daughter, Josephine Grace, in the Sandy Hook shooting — “It is the day to day that will make the difference,” as she tells Romper in a sit-down interview.

“Every family has had to find their own way forward, to honor their loved ones in ways that feel right to them. It was important for us to build a legacy for our children they would be proud of, focused on helping other people, and centered around their favorite place in the world: school,” Gay said in a subsequent email to Romper.

In response to the tragic losses that occurred six years ago, Gay launched Safe and Sound Schools, a program focused on increasing school safety and to address crisis prevention, response and recovery. Along with Alissa Parker — whose daughter, Emilie Parker, was also lost on that day — the two have created a national movement and resource for schools across the country.

“We didn’t start with politics, marketing, or fundraising. Instead, we started with a mission and work that couldn’t wait — heading out on the road and meeting thought leaders, experts, survivors, and other families of loss like us, in school communities across the country. We took the time to heal, listen, and learn about how we could help in the most authentic and fitting way, and more importantly, in a way our daughters would be proud,” Gay said.

A large part of this requires that parents regularly check in with their children and build that connection and bond each day.

To date, the program has been presented to 150,000 educators and school safety stakeholders from 1,150 cities and towns. It’s broken down into six key pillars of safety, one of them being community-building work. A large part of this requires that parents regularly check in with their children and build that connection and bond each day. Gay says that the day to day work within a family and household is what really makes a large difference.

Another pillar: technology. In this digital age, nearly every child is connected to the internet for a majority of the day. The harms of technology are plentiful, however, and that’s precisely why it’s an important factor for parents to take into consideration. Gay has partnered with Bark, a service that analyzes a child’s digital footprint daily for anything harmful or triggering.

“Our goal is to foster open and honest communication around your children’s digital lives,” said Titania Jordan, Chief Parent Officer at Bark.

The way Bark works is simple: First, parents ask their children to connect their social media platforms and online profiles to the app so that it can monitor text messages, emails and social activity for warning signs. Then, if a threat or worry is detected, parents receive a notification informing them. Parents are, however, not granted access to view all of their child’s messages themselves as Bark is not a spy service. Thirdly, Bark alerts parents of what to do based on what they’ve found.

Whether they found guns loaded or plans for how to carry out an attack or someone was in route to making an attack, we got verification that this alert was credible.

It’s not just for parents, however. After the Parkland shooting, Bark was made free to schools — who are legally required to monitor students’ activity on school devices — and has since been implemented in over 700 districts. Analyzing millions of data points a day, Bark has seen tremendous results, including when it comes to school shootings.

“In 16 cases where we picked up a severe threat, escalated it to the FBI or law enforcement ... 16 times the recipient of that alert has written back to say that this was an actual, credible school shooting threat. Whether they found guns loaded or plans for how to carry out an attack or someone was in route to making an attack, we got verification that this alert was credible,” Jordan tells Romper.

She recalls one incident that occurred at a school in the Northeast, saying, “A child had written on the bathroom wall, ‘Don’t come to school tomorrow. Bang, bang.’ Another child, who I guess went into the bathroom, took a photo of that on Snapchat and snapped it out to his friends. Our algorithm caught that Snapchat alert, alerted the school and law enforcement, and school was canceled for the next day.”

The goal of Bark is not to spy on children, but to foster a strong dialogue and trust in families. In addition to helping prevent 16 school shootings, the service has helped hundreds of thousands of students with issues like cyberbullying, sexting and more. Jordan also mentions that 36 families have written to Bark saying the app has saved their child’s life.

“We love to work with organizations like Safe and Sound Schools that can come in and guide that school on that process of making sure all six pillars are being worked on. In a lot of these cases, these shooters have expressed violent thoughts on Twitter or on Instagram — there were clear signs that could be digitally captured that no one took action on,” says Jordan. “And so Bark is a key component in safety for that.”

We never wanted or asked for this, but this our path forward.

Gay adds, “Today, almost six years into this mission, we are stronger. Safe and Sound Schools is not just two moms anymore. It is a national movement. We are joined by survivors of many different school-based tragedies, families of loss, and experts across all aspects of school safety — mental health, public safety, educators, leaders, parents, students and community members. Safe and Sound Schools galvanized a diverse group, united by the purity of our work and our mission, to ensure that all students are safe in school and that every school community has what it needs to ensure this basic right.

She continues, “There is nothing more important than ensuring the safety of every school community. We never wanted or asked for this, but this our path forward. The deep connections we have made have made all the difference, for us and for those we aim to serve. It’s a legacy of love above all things.”

Parents wanting to learn more about their role in school safety should visit the Parents for Safe Schools program at www.safeandsoundschools.org.