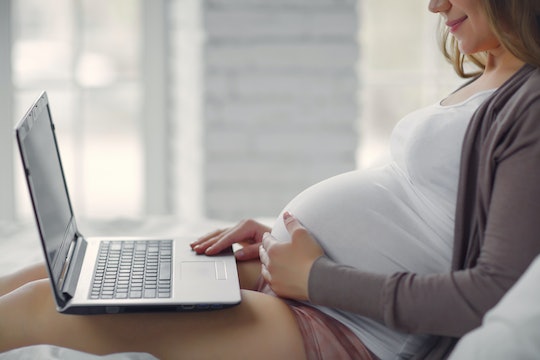 There has been a lot of discussion throughout the years regarding the safety of cellphones and wifi. Some people like to avoid wireless technology altogether, as they believe the radiation from these type of devices are dangerous to one's health. And, as it turns out, they may be on to something. A new study found that the radiation from wifi and cellphones can greatly increase your risk of a miscarriage, and it's a scary claim that is definitely worth investigating.

Scientists at the Kaiser Permanente Division of Research in Oakland, California, recently determined that exposure to high levels of radiation generated from wifi and cellphones can increase a person's risk for a miscarriage by a whopping 48 percent, according to the Daily Mail. Cellphones and wifi emit Magnetic Field (MF) non-ionizing radiation, which is the type of radiation that's "not energetic enough to cause ionizations in matter," according to U Penn. Apparently, I didn't pay enough attention in science class during middle school, because I had to look up what ionization means. Ionization, according to Business Dictionary, is the "process in which an atom or molecule acquires a positive charge or negative charge."

Since this type of radiation is pretty much everywhere, researchers behind the study aimed to figure out how it could potentially affect pregnant people. They evaluated 913 pregnant women at various stages of their pregnancy, according to The Sun. The researchers had the participants carry a EMDEX Lite meter, a magnetic field measurement and recording system, according to ENERTECH, for 24 hours. Participants were instructed to follow their usual routines during the 24-hour period.

Once researchers controlled for other factors that could contribute to miscarriage, they discovered that overall, "pregnant women who had higher MF exposure during pregnancy (higher 3 quartiles) had a 48% greater risk of miscarriage than women who had lower MF exposure (in the lowest quartile)," according to Nature.

Lead author of the study, Dr De-Kun Li, said of the results, according to the Daily Mail:

This study provides evidence from a human population that magnetic field non-ionizing radiation could have adverse biological impacts on human health. We hope that the finding from this study will stimulate much-needed additional studies into the potential environmental hazards to human health, including the health of pregnant women.

Obviously, these are frightening and seemingly extreme findings. Although this study is worth taking into consideration, it's important to note that there isn't a lot of additional research to back up the claim that non-ionizing radiation can seriously harm humans or cause cancer, for example.

David Coggon, a professor at the University of Southampton in the United Kingdom, wrote in an article for the New Scientist:

The non-ionising radio frequency radiation through which devices such as mobile phones communicate is of low energy, and as yet no plausible biophysical mechanism has been established by which exposures below internationally recommended limits could cause adverse effects in humans.

Additionally, the study doesn't seem to address why high exposure to MF non-ionizing radiation can lead to miscarriage.

Still, pregnant women who are worried about this study can reduce their exposure to MF non-ionizing radiation in a few ways. The BabySafe Project recommends the following five precautions:

​1. Keep your cell phone away from your body. Never carry it in a pocket or bra. Never sleep with your phone. ​2. Avoid cordless phones and their transmitting bases. 3. Keep your wireless laptop or tablet away from your body. Never rest your wireless device on your tummy. 4. Avoid close proximity to Wi-Fi routers, and "smart" utility meters. Turn off routers at night. ​5. Whenever possible, connect to the internet using wired (Ethernet) cables.

As with any new study that is somewhat alarming, it's important to not take the scientists' claims as 100 percent gospel. Although there might be a compelling link between miscarriages and radiation, more studies need to be conducted to prove causation.