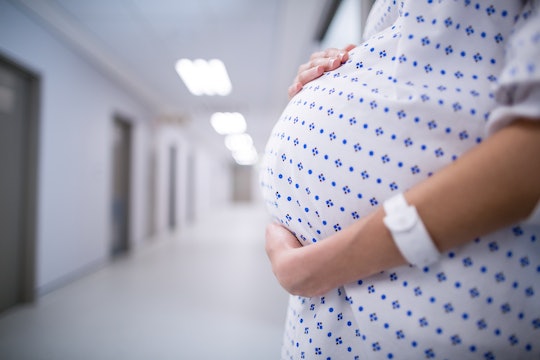 The Rate Of Pregnant Women Addicted To Opioids Is Escalating Quickly

A worrying new report from the United States Centers for Disease Control and Prevention paints a bleak picture when it comes to opioid addiction and mothers in this country. The rate of pregnant women addicted to opioids is startling, especially as it shows the issue has gotten a lot worse in just a 15-year period, CNN reported. But no matter the numbers, women who are facing this challenge need care and support, not shame and a lack of clearly very necessary health care services.

A new report published Thursday in the CDC's Morbidity and Mortality Weekly Report found that the number of women with opioid use disorder at labor and delivery more than quadrupled in a short amount of time, CBS News reported Friday. From 1999 to 2014, the rate of opioid use disorder reportedly increased from 1.5 per 1,000 delivery hospitalizations to 6.5. That's clearly a very upsetting statistic, and one that the CDC is very concerned with. CDC Director Robert R. Redfield, M.D., said in a statement, according to CBS News:

These findings illustrate the devastating impact of the opioid epidemic on families across the U.S., including on the very youngest. Untreated opioid use disorder during pregnancy can lead to heartbreaking results. Each case represents a mother, a child, and a family in need of continued treatment and support.

The rates are worsening across the U.S., but Vermont, West Virginia, and Kentucky show the highest concentrations of opioid abuse, according to Bloomberg. The lowest rates were found in Washington, D.C., at 0.7 per 1,000 births, and Nebraska, with 1.2, Buzzfeed News reported. The latest analysis was based on statistics from 30 states and the District of Columbia, so it's not totally inclusive, but definitely offers a concerning snapshot into the opioid abuse crisis in the U.S.

And for moms, when it comes to chronic untreated addiction to heroin specifically, "untreated addiction is associated with engagement in high-risk activities, such as prostitution, trading sex for drugs, and criminal activities," the American College of Obstetricians and Gynecologists reported. "Such behaviors expose women to STIs, violence, and legal consequences, including loss of child custody, criminal proceedings, or incarceration."

The opioid crisis is a huge issue in the U.S. In fact, opioid overdoses accounted for over 42,000 deaths in 2016, more than any previous year on record, the U.S. Department of Health and Human Services reported.

So, unfortunately, it makes sense that this crisis is affecting mothers, babies, and families, but it's still very concerning that the rate of pregnant women addicted to opioids has risen so much in recent years.

23 states and D.C. consider substance use during pregnancy to be child abuse according to civil child-welfare statutes, according to the Guttmacher Institute. Three say that it is grounds for civil commitment. Plus, 24 states and Washington, D.C. require health care professionals to report suspected prenatal drug use, and eight states require them to test for prenatal drug exposure if they even suspect drug use.

But the CDC report on opioid use by pregnant women suggests that those policies may actually result in women concealing substance use from their providers instead of getting the help and support that they need.

Instead, the report offered strategies for states to address opioid addiction among pregnant women to help women who are fighting addiction, instead of penalize them. The strategies included working towards appropriate opioid prescribing, enhancing prescription drug monitoring programs, and universal substance use screenings at a first prenatal visit, CBS News reported.

Additionally, the report said said that "continued national, state, and provider efforts to prevent, monitor, and treat opioid use disorder among reproductive-aged and pregnant women" could also include the use of medication-assisted therapy, and substance abuse treatment referrals.

“Even in states with the smallest annual increases, more and more women are presenting with opioid use disorder at labor and delivery,” Wanda Barfield, M.D., M.P.H., F.A.A.P., Rear Admiral, U.S. Public Health Service (USPHS), and a director for the Division of Reproductive Health, said in a CDC statement. “These state-level data can provide a solid foundation for developing and tailoring prevention and treatment efforts.”

The opioid crisis is a national emergency, and it's not going to go away anytime soon. If people want to see the rates of opioid addiction go down, particularly among pregnant women who are dealing with the problem in alarming numbers, they need to advocate for widespread support and action on a local, state, and national level.