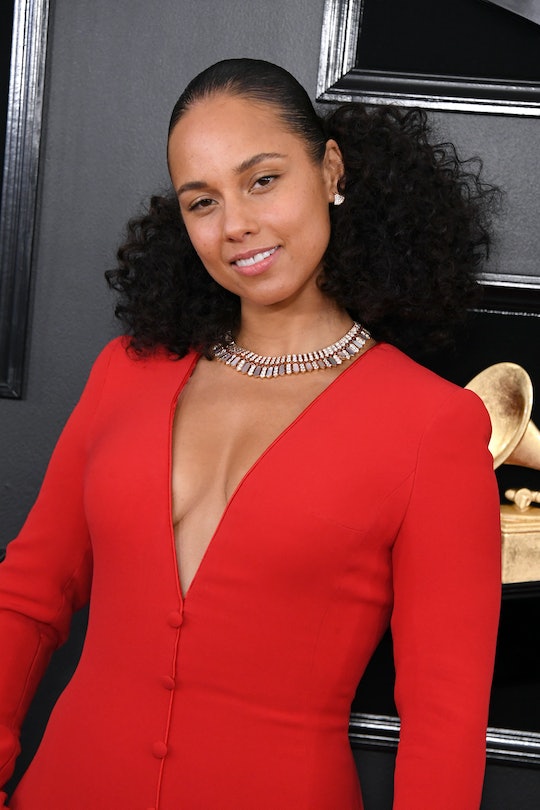 The Grammy Awards haven't seen a female host in 14 years, and, like other award shows in recent years, they've faced their share of criticism for a nomination pool and voting academy seriously lacking in diversity. One attempt to address the issue this year may have been appointing Alicia Keys as host, breaking James Cordon and LL Cool J's seven-year hold on the honor. She's the first non-comedian woman to host, but the reaction to Alicia Keys' opening monologue at the Grammys was powerful. Rather than going with a funny musical opening number, Keys brought up Lady Gaga, Jennifer Lopez, Jada Pinkett Smith, and Michelle Obama to help her deliver a message of woman empowerment.

Keys is only the fifth woman to host the Grammys in its 61-year history, after Queen Latifah in 2005, Rosie O’Donnell in 2000 and 1999, Ellen DeGeneres in 1997 and 1996, and Whoopi Goldberg in 1992, according to Forbes. Her appointment comes just a year after outgoing Recording Academy President and CEO Neil Portnow infamously said in an interview with Variety that the reason women were so underrepresented at the 2018 Grammys was because they needed to "step up." (After swift backlash, he released a statement saying the quote was taken out of context and he regretted using those words.)

Needless to say, bringing out the former First Lady of the United States to talk about the impact of women artists on her life was a pretty solid clapback. Before being joined by her guests, however, Keys took a moment to sooth everyone's jitters, saying, "I want everybody in here who might be feeling a little nervous, might be feeling a lot of energy, just let your shoulders drop. Know that I've got you, I'm going to take care of you tonight."

She shouted out Tracee Ellis Ross, Dolly Parton, Chloe x Halle, her mom, and her husband, before making a moving speech about the necessity of music. "Music is what we cry to, it's what we march to, it's what we rock to, it's what we make love to," Keys said. "It's our shared global language, and when you really want to say something, you say it with a song."

Gaga went on to talk about how everyone told her she was too weird to make it in the industry, while Lopez revealed how music kept her dancing, from The Bronx to the big screen. "Every voice we hear deserves to be honored and respected," Pinkett Smith said, and then the crowd roared for Michelle Obama. "Amen," she agreed. Added Obama:

From the Motown records I wore out on the South Side to the "who run the world?" songs that fueled me through this last decade, music has always helped me tell my story, and I know that's true for everybody here. Whether we like country or rap or rock, music helps us share ourselves; our dignity and sorrows, our hopes and joys. It allows us to hear one another, to invite each other in. Music shows us that all of it matters; every story within every voice, every note within every song.

In addition to choosing a female host this year, 900 music creators "of diverse backgrounds" were invited to join the Academy in October of 2018, in an effort to prevent another homogenous awards ceremony. And it appears to have worked. Five of this year's eight Album of the Year nominees are women, and Brandi Carlile is the third most nominated artist behind Kendrick Lamar and Drake. Hopefully, the rest of the awards doled out tonight prove that the tides are turning at the Grammys.