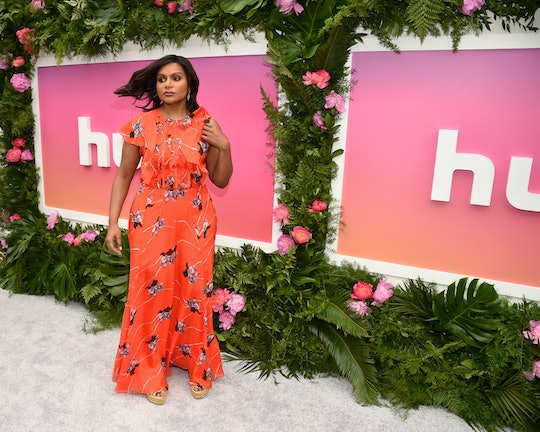 Mindy Kaling Is A New Icon For Single Motherhood

On a slow Monday morning, the Internet exploded following reports that Mindy Kaling is pregnant. According to E! Online, the 38-year-old star of The Mindy Project is expecting her first child, which a source close to the actor referred to as an "unexpected surprise." Almost immediately, there was rampant speculation over who Kaling's baby daddy was (and yes, that was the terminology used by most people on social media), with many fans placing the smart money on her ex, The Office co-star BJ Novak. Yet while the gossip over the father of Kaling's baby's identity was somewhat inevitable, what was not inevitable was the refreshing lack of judgment surrounding Mindy Kaling's status as a single mom, which says a lot about how our society currently views single motherhood.

Mindy Kaling has always been super open about her dreams of becoming a mom. She wrote a pregnancy storyline for her alter ego Mindy Lahiri on her Hulu show The Mindy Project, and in a 2015 interview with Yahoo! Style, she was candid about her future plans to have a child.

"I think I've decided that unlike everything else in my life, I'm going to be fast and loose about kids," she said. "I'm going to not actively plan, but if it happens, it would happen." She later added that she hoped to have children "maybe imminently."

Now that Kaling is reportedly pregnant, with the exception of a few inevitable trolls, people on the internet are rejoicing over the news. It's a marked departure from how people would've reacted if a high-profile celebrity like Kaling had a child without a father in the picture, say, 10 years ago — which says a lot about how much our cultural view of single motherhood has evolved in a relatively short amount of time.

In previous decades, single motherhood was highly stigmatized, with many believing unmarried women with children were largely poor and uneducated. Yet that image has been gradually shifting. According to the United States Census Bureau, there are nearly 12 million single-parent families in the U.S., with 80% of those households being headed by single mothers. What's more, a growing number of single moms are not on the lower end of the economic spectrum: 58% have attended college, and 32% earn $40,000 or more, according to Pew and census data (though it's worth noting they are still more likely than married mothers to be living in poverty.) What's more, the age at which women are having their first child is slowly on the rise, from 25 years old in 2000 to a little over 26 years old in 2014.

"I just don’t feel I need a partner. Do I want one? Maybe. But I don’t feel unhappy or lonely."

Thanks to the societal trend of women delaying marriage and kids, it's never been more acceptable for women to become mothers on their own timeline and their own terms, and given that Kaling is 38, she falls squarely within this trend.

Single motherhood is also becoming more socially acceptable thanks to celebrities bringing increased visibility to the trend. Celebrities like Sandra Bullock and Kristin Davis have adopted children on their own, and January Jones and Padma Lakshmi have given birth to children without publicly revealing who the fathers were. (Lakshmi later revealed that the father of her daughter Krishna was venture capitalist Adam Dell.)

In 2017, Jones gave an interview to Red Magazine making it clear that she did not consider having a husband to be a prerequisite for parenthood. "I just don’t feel I need a partner,” she said. “Do I want one? Maybe. But I don’t feel unhappy or lonely. It would have to be someone amazing that I would want to make room. Someone who would contribute to my happiness and not take away from it.”

The fact that single motherhood is becoming more culturally acceptable, however, does not mean that the stigma has disappeared entirely. If a woman has a child out of wedlock, people typically make the assumption that there are no other parents in the picture, even if she has an extensive support network of family and friends (or, in some cases, even if the father still very much assumes co-parenting responsibilities). That assumption applies doubly if the mother is a woman of color.

"Being a single mom comes with a tremendous amount of shame, even in 2017. It feels more like an embarrassment than an achievement," Romper's Latifah Miles wrote. "Society deducts a little piece of joy from our experience as mothers, simply because we aren't parenting with a partner."

Because Kaling is a wealthy and powerful celebrity, it's doubtful she will be subject to much of the judgment that is still doled out to single mothers on a regular basis. But it's also true that our world has changed a great deal since women who got pregnant out of wedlock were shipped off and forced to give birth in convents and boarding houses. (Hell, does anyone even use the phrase "pregnant out of wedlock" at all anymore?). Gradually, people are realizing that parents come in many different types of forms — which makes the enthusiastic, judgment-free response to Kaling's pregnancy even more refreshing.