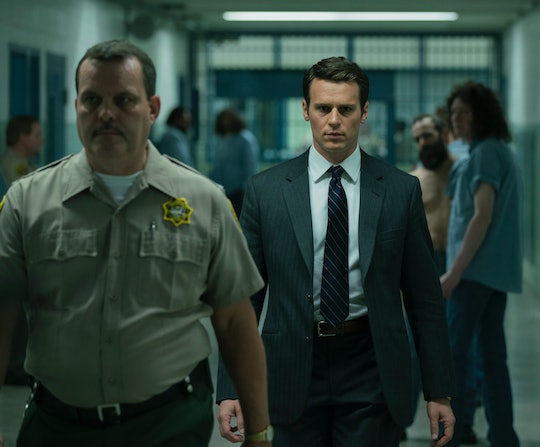 Throughout its first season, Mindhunter delved deeply into the psyches of serial killers in an effort to understand their psychology. But its characters also investigated ongoing crimes with the hope that all that research would help solve the cases. It didn't always work, and it might not in Season 2. That's because the crime central to the season is one that never found a resolution in real life. The real Atlanta child murders remain unsolved, so Mindhunter Season 2 might not be able to unearth any answers about who was responsible.

The Atlanta child murders were a series of homicides that occurred in Atlanta, Georgia from 1979 to 1981, per Elle. In those few short years, at least 28 black children, mostly boys ranging in age from 7 to 17, were killed. Some of their bodies were never found, according to The New York Times; 10-year-old Darron Glass vanished in September 1980 and is still missing. Sheila Baltazar, stepmother to 12-year-old victim Patrick Baltazar, told the publication what living through that kind of horror felt like.

"Every day, every night, it seemed like they were finding bodies," Baltazar said. "The city was turned upside down. There was this big dark cloud over us. And we were just trying to hold on to our babies."

The bodies of the murdered children were found in different spots all over the city, in rivers or dumpsters. More than 100 agents were assigned to investigate the crimes, but it was difficult to determine what connected the crimes to one another or who was responsible for committing them, per The New York Times. It seems only one prime suspect ever emerged, though he was never convicted of the murders. That man was Wayne Williams.

Williams first emerged as a suspect, according to NPR, because the police spotted him at the Chattahoochee River while they were stationed there on a stakeout. Bodies of other victims had been found in that location. Williams drove over the river, an officer heard a splash, and several days later, a body was discovered. In 1982, Williams was convicted of two murders and sentenced to life in prison — but not the murders of any children. He was convicted of killing adults Nathaniel Cater and Jimmy Ray Payne, who were found in the Chattahoochee River after they were killed, according to CNN.

Williams was linked to the murders because carpet fibers, bedspread fibers, and dog hairs found on the bodies allegedly matched fibers in his parents' home, per People. Those fibers were alleged to have matched 10 of the other cases as well. Since Williams was the chief suspect in the child murders, People reported those crimes were considered closed upon his arrest, even though he was not arrested for those murders specifically.

Williams has maintained his innocence, according the the LA Times. Since there are no concrete answers about these murders in real life, it seems unlikely that Mindhunter will be able to conclusively determine who killed over 28 children in Atlanta almost 40 years ago. But reexamining the case and bringing it back to the public eye might shed some light on what happened.