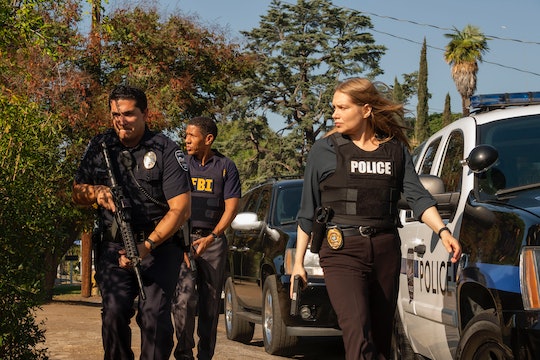 In Netflix's Unbelievable, officers Grace Rasmussen (Toni Collette) and Karen Duvall (Merritt Wever) are tracking a serial rapist across multiple states. Through touch DNA, they're able to discover a possible suspect — but are instead led to the perpetrator's brother, Curtis McCarthy. Since the show is based on a true story, you might find yourself wondering where the real Curtis McCarthy from Unbelievable is now, after finding himself in the middle of a police investigation.

Though Unbelievable recreates real events, nearly all of the characters' names have been changed from those of their real life counterparts. While the perpetrator is named Christopher McCarthy (Blake Ellis) and his brother is Curtis, in real life they were Marc and Michael O'Leary. The ProPublica article the show is based on, "An Unbelievable Story of Rape," details how officers first found Michael, but there's no information about what his life was like afterwards.

Michael O'Leary isn't a public figure and he wasn't involved in the case outside of the initial confusion. He doesn't have social media or a public presence of any kind, nor has he done any interviews about his brother's crimes. It seems like he has tried to maintain his privacy, so it's impossible to state with any certainty where he is now.

Michael O'Leary's connection to his brother's crimes was brief and quickly resolved, according to ProPublica. The police were initially led to Marc O'Leary because of a white 1993 Mazda that was spotted near the home of the Lakewood, Colorado victim. The car was registered to Marc O'Leary. Police were able to link identifying details about the car seen by the victim's home to Marc's car, on top of it being the same make and model. Both cars had broken side passenger mirrors and ball hitches on the back.

Since it was a promising lead, the police decided to try to get a sample of Marc's DNA to match the touch DNA they had found on items in the victims' homes. The trouble was, there wasn't enough DNA to single out a specific person; they would only be able to determine that someone from the O'Leary family had committed the assaults. That was where the confusion came in.

The officers followed a man who looked like Marc O'Leary as he left his house with a woman. They went to a restaurant and ate; the police collected the cups from the table afterwards so they could run the DNA. It was a match, meaning a man in the O'Leary family was the perpetrator. But the man in the restaurant wasn't Marc, it was Michael. They looked surprisingly alike and one of them was responsible, but it wasn't immediately clear who.

Michael and Marc were both suspects, but the police were able to narrow it down based on accounts from the victims. One woman had seen a distinct egg-shaped dark spot on her rapist's leg; once the police acquired a search warrant, they were able to check Marc's leg. They found the mark, which confirmed that he was the guilty party. Marc was charged and confessed to 28 counts that included "sexual assault, burglary, aggravated robbery, assault, menacing with a deadly weapon, and kidnapping," per HuffPo. He was sentenced to over 300 years behind bars.

As it turned out, Michael O'Leary wasn't really involved at all, outside of inadvertently helping police confirm their suspicions. The real Curtis McCarthy only played a small part in the investigation.

Unbelievable is currently airing on Netflix.