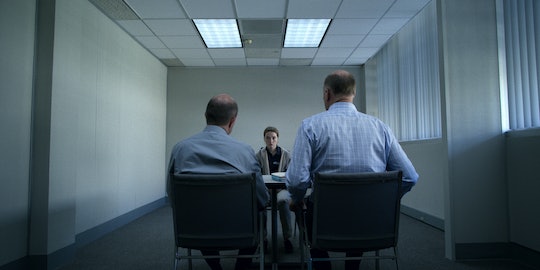 What Happened To Detective Parker On 'Unbelievable' After Marie's Case?

When Marie Adler (Kaitlyn Dever) is raped in the Netflix series Unbelievable, which is based on a true story, she finds herself telling the story over and over again. She tells it to the police and to nurses, and multiple times to the lead officer on the case, Detective Parker (Eric Lange). But he finds Marie's account unreliable. Marie wasn't lying, but Parker was instrumental in causing her to recant. Finding out where the real Detective Parker from Unbelievable is now could reveal what he thinks about the events that transpired on the show.

Though Unbelievable is based on a true story, all of the names have been changed. Detective Parker was likely based on Sergeant Jeffrey Mason, one of the first officers from the Lynnwood Police Department to speak to the real Marie after she was raped. According to the ProPublica article, "An Unbelievable Story of Rape," Mason had only worked on a couple of rape cases before leading the investigating into Marie's assault; he had previously worked in patrol and narcotics.

Mason began to doubt Marie's account after a conversation with one of her past foster mothers, Peggy Cunningham. She thought perhaps Marie had invented the story for attention because of the strain of living on her own for the first time; she also found Marie's numb behavior after the attack unusual. After that, Mason began to notice what he thought were inconsistencies in her story.

The order of events in Marie's written account of the rape differed from the story she'd first told detectives, in small ways. Mason interviewed Marie's friends and then confronted her about the mixed up details, according to ProPublica. Both Mason and his co-worker, Jerry Rittgarn, began to be convinced that Marie was lying. During questioning, they encouraged her to say her report was a lie, which she did. She was later charged with filing a false report, a criminal citation signed by Mason.

Eventually, Marie's assailant was caught by two female officers, Detective Stacy Galbraith and Sgt. Edna Hendershot, after a series of similar rapes occurred. The real Marie sued the Lynnwood Police Department, according to the Seattle Times; she claimed the officers had disregarded evidence and bullied her into recanting. She named Mason and Rittgarn in the suit, as well as Police Chief Steven J. Jensen. Ultimately, the city of Lynnwood paid Marie $150k according to the outlet.

There was an internal review of the police station after Marie's rapist was caught. ProPublica reported that Mason returned to narcotics afterwards, though he seemed regretful about how things had unfolded with Marie's case. He told the publication that it wasn't her job to convince him; he was supposed to get to the bottom of things and he didn't. Later, he apologized to Marie directly, saying he was "deeply sorry."

That was in 2015. At that time, Mason was still a member of the Lynnwood Police. There hasn't been any public report about him moving or changing jobs since then, though of course it's possible that it just didn't make national news. Outside of his connection to the case, Mason is not a public figure. It doesn't look like he's spoken about what happened publicly since 2015, so one can only assume he's still working in Lynnwood, as was last reported.

Unbelievable is currently airing on Netflix.