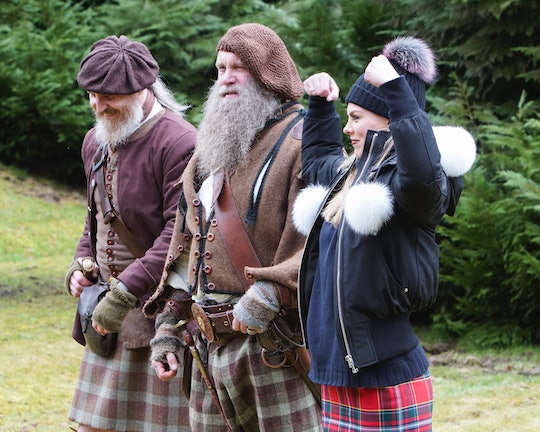 The time has come for Bachelorette Hannah to see if her men can handle her overseas. That's right — it's travel time again and the first big place of the season takes the crew to Scotland. Aside from the hopes of seeing the dudes in kilts, you'll also get an unexpected history lesson in tradition. The real Highland Games is one of Scotland's greatest treasures and has been a part of the Scottish culture for hundreds of years.

In case you're lost on what I'm talking about, The Highland Games events are unique, combining athletic competitions with social and cultural events. They officially take place between Cowal and Tomintoul. Sporting competitions might include track and field events, dancing competitions, tug-o-war competitions, a hammer throw, the caber toss, and bag-piping. Some will have livestock, parades, best pet costumes, and more, and may continue on through the night. According to the Scotland.org website, "The Braemar Gathering, held in September, is the biggest and most prestigious Highland Games event and enjoys the annual attendance of the Royal Family." It's a real party and the perfect place for Hannah to see what the men are made of. The whole experience, a blend of heritage, community, and celebration, is what you go for.

While primarily a Scotland thing, the games now stretch pretty far and wide. The one-day events are executed all around the world.The "season" typically begins in May, peaks mid-summer, and ends in September. Seeing as The Bachelorette already filmed, their version of the Highland Games may have been created for TV, or is some version of the real deal to suit the timeline.

If that's not enough to get you psyched for this action-packed episode, some Highland Games include "haggis hurling" in which a haggis is thrown, an anvil launch where a blacksmith's anvil is thrown with dynamite (yikes), and a watermelon hunt to portray hunting for "Nessie," the Loch Ness monster. Don't worry — those melons are traded for actual prizes. I already have a few eligible bachelors in mind for a few of these games, and I'm sure Hannah does, too. Regardless of how this shindig goes down, I have a feeling some guys will aggressively try to steal the spotlight, while others spend their time actually getting to know Season 15's reigning Queen.

Past seasons of the franchise have had contestants in all kinds of competitive games. There's no line too far to cross when it comes to love — especially if the Bachelor or Bachelorette takes the contestants abroad. It was only last season, when Hannah was vying for Colton Underwood's heart, when she and the other women were dared to eat some of the local delicacies (bugs). Hannah didn't miss a beat so I'm sure she'll be most into the guys who take initiative (while also respecting the other men). Either way, this version of the Highland Games will probably come with a few injuries, broken hearts, and probably make out sessions.

Personally, I'd rule at tug-o-war, but I'm not the one trying to win Hannah's heart. Men of the show, make me proud.