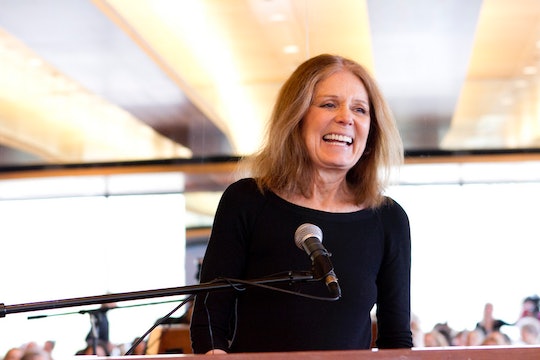 As soon as the words left Gloria Steinem's mouth on Friday night's episode of Real Time with Bill Maher, I knew she had stepped in it. That quote from Steinem about women who support Bernie Sanders because of boys was going to get picked up and go viral, without the benefit of the context in which she said it. And, howdy, did it sure piss off millennial ladies.

But, really, millennial women shouldn't get it twisted. Steinem is a big supporter of millennial women and their freedom to make their own choices. So, instead of focusing on being offended by a part of one quote, maybe it would be more useful to actually listen to what she had to say in the moments preceding the bad quote. Because, sometimes, context is key, and, in this case, there was a whole lot more to what Steinem said than bashing young women for being boy crazy.

First, she defended millennial women against critics like Democratic National Committee Chairwoman Debbie Wasserman Schultz who slammed young women for not supporting former Secretary of State Hillary Clinton because they don't appreciate what feminism has given them. For many women, Steinem included, that's obviously not true, and Steinem made that clear. But that's not what got picked up.

Here's the quote that damned her, according to video of the interview:

They’re going to get more activist as they grow older. And when you’re younger, you think: ‘Where are the boys? The boys are with Bernie.

OK, now admittedly that sounded bad, real bad, to millennial women, who are every bit — if not more — feminist than any other generation before them. It sounded like Steinem was shaming them for not supporting Clinton just because she's a woman. That sucks and was a completely unfair characterization of a group of ladies who have been the driving force behind really important movements from Black Live Matter to Occupy Wall Street.

But, in reality, that's exactly what Steinem was trying to say, even though it came out all kinds of wrong. Just before she put her foot in her mouth, she was explaining that young women have to assert their feminism around the issues that impact them, both in this time and where they are, geographically. Steinem defended millennial women by telling Maher that she herself didn't have time to be grateful to the women who came before her who secured her right to vote. As a young woman she was dealing with feminism in her time and in her generation's way.

Here's the lead in to the boy crazy quote. Start the video at about 3:13 to see the whole exchange.

Maher: There are people, among them Debbie Waserman Schultz who have said that the younger generation of women are very complacent about Roe v. Wade, that they weren't around before and they don't have an appreciation. Do you think that's right?

Steinem: You know, I don't think so. I find the young women very activist and they're way way more feminist that we ... I mean we were like 12 crazy ladies in the beginning, you know now it's the majority. But I do think that gratitude never radicalized anybody. I did not say 'thank you for the vote' I got mad on the basis of what was happening to me, and I think that's true of young women too. So they're mad as hell because they're graduating in debt and they're gonna earn a million dollars less over their lifetime to pay it back, you know, they're mad about what's happening to them.

It was the response that came next to Maher's question about why young women are supporting Sanders over Clinton that veered into the questionable stuff about boys, but if young women listened to the point she's making, they might learn just why older women have been so focused on supporting Clinton as a feminist statement.

See, when women are in their 20s, they're the ideal as far as men are concerned. IT sounds really bad, but they're young and gorgeous and fresh; their hair is shiny and their faces are perfectly wrinkle free. I know it doesn't seem like it, but when women are young and at their most beautiful, that's most men are most interested in what they have to say — and it's one of the many reasons feminism is so important. As women age, things change.

It's not that young women are boy crazy — it's that there some kind of place for young women among the men in their youth that really does disappear as they get older. Men are willing to give young women a seat at the table, even though it's for all the wrong reasons. As they age, a woman has to seek out tables controlled by women to have a voice.

When I spoke my mind in my 20s, it was received as plucky. In my 30s, it just started shifting to be viewed as bitchy and annoying. And, age doesn't just shift how the male-dominated world treats women, it changes how women see the world as controlled by men. As the years start to make women increasingly invisible, they might start to feel their power in the world fade along with it. If beauty and sexuality is a woman's source of power over men, as that fades, so does their power. And that completely sucks. Because, as women add years, they also become more experienced and educated (like most people), and thus have more to contribute. So, they start to want to fight harder against a society that has marginalize them for all of their lives. The fight for women's place in the world becomes more immediate and feels more important.

So, that's the point Steinem was trying to make. She does think millennial women are activists and feminists. She understands that millennial women's immediate issues of debt and income inequality are more important than just being able to say they've elected a woman to the the White House. This generation's young women need more than just a token feminist accomplishment. And good on every single young woman, regardless of who they support politically, for making that choice to empower themselves and their generation through their political voice.

But, please, can we stop beating up on Gloria? She's been on the side of women for decades and, at 81-years-old, should be forgiven for a flippant statement made on live television. Most importantly, though the statement might not have come off exactly right and many millennial women might not want to hear it, Steinem had a point about why different generations of feminists might see the candidates differently. Those differences in feminist movements throughout the years are certainly something that millennial women should keep in mind.