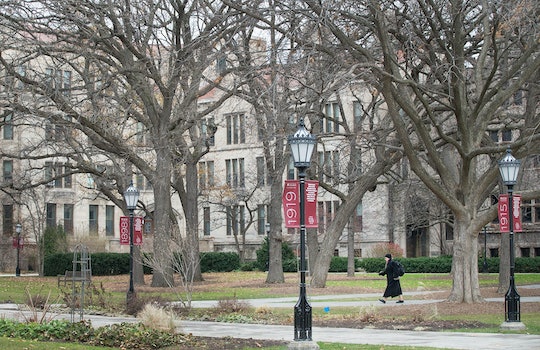 A letter sent to this year's incoming freshman class at the University of Chicago warns that students better be prepared for a very specific kind of environment on campus. The letter from the college's dean, Jay Ellision, explains that the University of Chicago rejects safe spaces and trigger warnings, which he believes inhibit free speech within the college's community — and, effectively, in the world beyond.

The letter began circulating on social media and has received mixed responses from the general public, as it has within the student body at the University of Chicago. The debate comes on the heels of many high-profile sit-ins and protests of speakers invited to speak on campus over the last few years. In his letter to students, Ellison writes:

Our commitment to academic freedom means that we do not support so-called "trigger warnings", we do not cancel invited speakers because their topics might prove controversial, and we do not condone the creation of intellectual 'safe spaces' where individuals can retreat from ideas and perspectives at odds with their own.

The response to Ellison's — and the college's — rejection of trigger warnings and so-called "intellectual safe spaces" has drawn a line in the sand for many. While some have praised the college for enforcing the principles of free speech, others worry that they are simply masking hate speech as "discourse."

What Is A Safe Space, & What Is A Trigger Warning?

The original idea behind creating safe spaces or presenting "trigger warnings" is that it allows individuals to decide if they want to be exposed to content that may be difficult to endure due to a trauma they've experienced or are currently working through. And to be honest, it's impossible for a trauma survivor to always avoid those triggers — even if they heed trigger warnings. They know this better than anyone else — but when safe spaces exist for them to go to, or trigger warnings pop up, it helps them reclaim control over their lives when, in many cases, the trauma they experienced ripped them of that feeling and they are attempting to slowly rebuild.

But the question of what constitutes a trigger is a tricky one, because the term has been expanded to encompass a lot more and has been adopted to "protect" a lot more people — not just trauma survivors.

One example of a community that frequently utilizes trigger warnings is those who are in recovery from an eating disorder, such as anorexia or bulimia. For those who are recovering either from a mental illness like anorexia, or dealing with the aftermath of a violent trauma, such as rape, the actual process of psychological recovery can be negatively impacted by being exposed to triggering imagery before an individual is ready to confront that stimulus.

It's also important to note that that confrontation usually happens in a "safe space" — such as in therapy — or with the close support of their family and friends. A safe space, in its original form, is meant to be a place not to hide from what is painful or traumatic, but to confront it with support, compassion, and in one's own time, as one feels they are ready to do so.

The University of Chicago isn't the only American college having a discussion about where to draw the line between hate speech and free speech: last fall, University of Montana president Tim Wolfe resigned after students called for him to step down amidst racial tensions on campus that the student body felt had been poorly addressed. It was only when the college's football team threatened to forfeit a game unless the president stepped-down (which would have cost the college $1 million) that Wolfe agreed to resign.

A discussion of freedom of expression and free speech ensued at Yale after the wife of a professor (who was also a lecturer in early childhood education) sent an email imploring students to view the college's "heavy-handed" suggestions about costumes through a more intellectual lens, bringing up some points about when imagination and play crosses over into cultural appropriation. In her email, she admitted she didn't have the answer, but asked students to consider whether Halloween was really a hot-bed for appropriation, and even if it was, would it be right for the college to even attempt to impose guidelines on young adults? Let alone children, who she noted, certainly don't intend to appropriate a culture when they want to dress-up as a character for Halloween:

I suppose we could agree that there is a difference between fantasizing about an individual character vs. appropriating a culture, wholesale, the latter of which could be seen as (tacky)(offensive)(jejeune)(hurtful), take your pick. But, then, I wonder what is the statute of limitations on dreaming of dressing as Tiana the Frog Princess if you aren’t a black girl from New Orleans? Is it okay if you are eight, but not 18? I don’t know the answer to these questions; they seem unanswerable. Or at the least, they put us on slippery terrain that I, for one, prefer not to cross.

The result was that students turned on the professor and his wife, effectively ousting them from the Yale campus (where they didn't just teach, but lived) and denounced them as racists. Many felt that the students' response — with some even going so far as to say they no longer felt safe living on-campus after the email circulated— was overzealous.

The University of Chicago, which has already experienced disruptive on-campus demonstrations in protest of speakers, and the letter from Dean Ellison clearly stating the college's stance on tolerating anything further sends a clear message: get ready to confront anything and everything — even if you are a survivor of a trauma such as rape. This stance has been explained on the school website's section on Free Expression, which includes policies on protests and demonstrations.

The University has long recognized that the right to protest and demonstrate does not include the right to engage in conduct that disrupts the University's operations or endangers the safety of others.

Earlier this year, the school government voted to indefinitely table a resolution reaffirming the university's commitment to free speech. This came after a series of speakers were interrupted or shut-down by student protests on campus. The resolution would have "condemned any student who obstructs or disrupts free speech," according to the school newspaper The Chicago Maroon.

Many believe that Ellison's letter to students was instigated by this decision, as well as the disruptive protests last year. Despite the letter and the increased protests on campus, The University of Chicago still has the highest rating of Foundation for Individual Rights in Education (FIRE), which assesses the free speech policies of American universities.

When other communities use "trigger warnings" as a way to side-step ideas they don't agree with, or to avoid conversations as a matter of principle, it negates the intended function of a trigger warning and twists the concept of a safe space into something that can no longer serve the people it was created to help.

For those who rely on these concepts while they are healing from trauma or learning how to cope after a traumatic event, saying that trigger warnings are "coddling" or "excuses" effectively negates the work that they're doing every single day to heal (potentially from something like post-traumatic stress disorder) and learn how to live in the world again — work that is anything but easy, and certainly not "coddling."

One might even go so far as to say that those who use "trigger warnings" as an avoidance tactic in intellectual institutions are appropriating the concept from those it was created to protect.