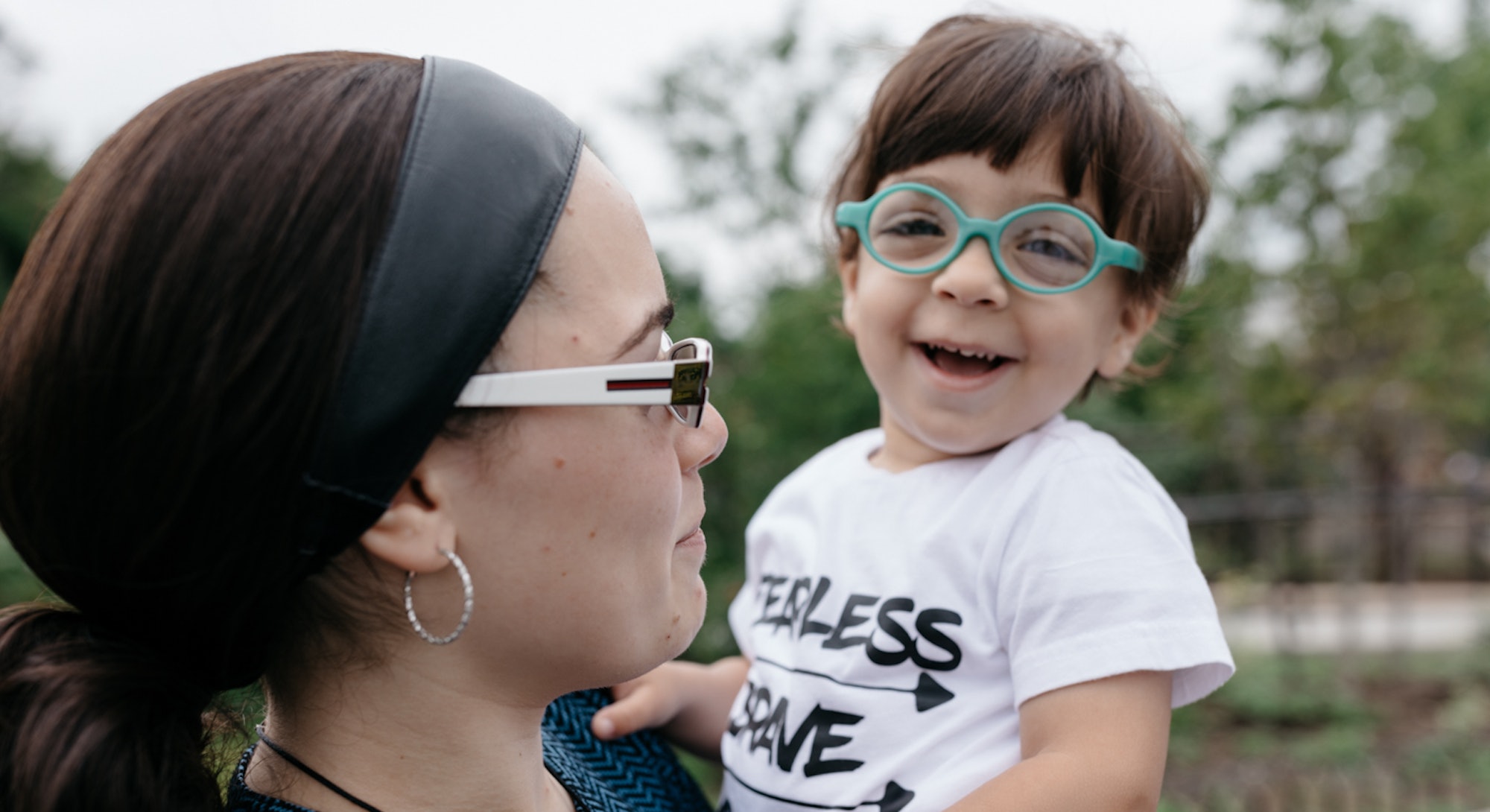 The Real Reason I Hid My Son's Disability For So Long

Sylvia Klein is a 25-year-old mother living in Brooklyn. As I chat with her about her life, her 2-and-a-half year old son, Gadi, occasionally chimes in, requesting something from his mother. She apologizes to me, patiently asks him what he needs, and then turns back to our conversation. It seems like such a typical mother and toddler interaction, except that Sylvia was told Gadi would never speak. Gadi has spastic quad cerebral palsy, meaning his cerebral palsy (CP) affects all four of his limbs and, as in the vast majority of cases, results from damage to his brain's motor cortex, causing muscle spasticity.

Sylvia proudly says that Gadi is talking “like a teenager”— something our team witnesses after his photo shoot, when he shakes all of our hands and says, "Very nice to meet you." Gadi is able to move using a commando crawl, and Sylvia explains that she and her husband are currently considering a surgery to improve his chances of independent mobility. She is clear that despite Gadi’s struggles, she and her husband try to treat him like any other kid.

My son Gadi is 2-and-a-half. He has a diagnosis of spastic quad cerebral palsy (CP). He is a really smart little boy. He loves to have a good time. We try really hard that his diagnosis doesn’t define who he is.

Gadi was born prematurely at 32 weeks. The pregnancy went fine [up to that point] — my water just broke one morning. He was born weighing 4 pounds, 6 ounces. They had to resuscitate him at birth. He stayed for five weeks in the NICU, mainly for respiratory and feeding issues. When we were discharged, we were told everything was fine. Nobody let us know that children who are born early are at higher risk of CP.

Once we got home, we noticed that he held his legs really stiffly and he had tremors in his legs. The doctors told us we were just typical first-time parents, that we were worried about every little thing. We went to the pediatrician and they told us it was a preemie thing. Everything was blamed on him being born premature.

At some point we decided to go for an Early Intervention (EI) evaluation. [The federal Early Intervention Program provides therapeutic services for children under the age of 3 who have developmental delay confirmed by the state.] I was hoping to get approved for physical therapy just to address the stiffness in his legs, but I really didn’t think we would get approved for anything.

At the evaluation, the evaluator casually asked us if we had ever seen a neurologist. Around the same time, we went to a new gastroenterologist for a second opinion to address Gadi’s reflux and vomiting. The doctor asked the same question: “Did you ever see a neurologist?” He pointed out that Gadi’s legs scissor, that they cross over each other when you hold him in a standing position. He explained that can be a sign of CP, especially in premature babies.

And that’s when I started to get a little bit nervous. So we made an appointment to a neurologist. Literally, within five minutes of examining him, the neurologist turned to us and said, “Your son has cerebral palsy; it’s clear cut.” Gadi was 7 months old at the time. We were really shocked. No one had informed us that preemies were at higher risk of having CP — not the NICU staff or the pediatrician.

I wanted friends and family to continue treating us as they did before we received a diagnosis and not to view Gadi or [us] differently. So, in the beginning we didn’t tell our family. We didn’t think it would be beneficial to let them know, because he was still really young and any of the milestones he wasn’t meeting could be blamed on him being born early. We felt like they were going to question us, like we should get another opinion or see another doctor. And it is like, this is our child, we’re adults. We can make our own decisions. So we kept it quiet for two to three months until I realized that there is no point in keeping it quiet.

[Hiding it] was much more difficult then I thought it would be. It gets to a point when you can't blame everything on Gadi being born premature. And Gadi's diagnosis is nothing for us to be ashamed about. It's not something that I blame myself for. Yes, it does make our family different, but different is OK. It's made us stronger as people and as a family.

From his CP Gadi has spasticity, which is basically tightness of muscles. It is as if his body feels like he's constantly being pulled down, like having your whole body walk in sand or water. All his movement takes much more energy. He burns many more calories than an average child, so he fatigues very quickly. And it affects all muscles, so things like talking and eating can be more difficult.

Currently Gadi is learning to use a walker. [The therapists] are using it mainly as a therapy tool. Right now, he gets around through commando crawling. He can sit up in what is called a w-sit, which is the most common way children with CP sit. He just started pulling to stand about a week ago.

We were told by doctors that he was going to need a G-Tube, [an abdominal feeding tube] because of his feeding difficulties, but we just had him off of solid foods and on thickened feeds for a really long time. Right now he is eating the majority of foods, but he has a hard time with certain consistencies.

We were told by a different doctor that Gadi would be non-verbal. Gadi proved them very wrong. He is a really verbal child. He talks like a teenager. Doctors, they only know so much. You have to trust your own instinct. You have to listen to doctors, but even though a doctor might be a top specialist in the world, not everything they say and not all predictions that they make are true.

Right now we are considering a surgical procedure called Selective Dorsal Rhizotomy (SDR). It is a surgery on the spine where they cut the nerves that send the spastic signals to his legs. The goal is to give him a better chance of being able to walk more independently. We don't know if that means completely on his own [without assistive equipment] or if that means with crutches or using a walker more functionally. It's a risky surgery because it is on the spine. And then there are six weeks of post-operative inpatient rehabilitation. It is it is a difficult decision, but it might give him a better chance of independent mobility. So in deciding there's a lot of talking to professionals, to doctors, and talking to parents as well. A big tool has been social media — because within my physical community where I live, there isn't really a support system for children with physical disabilities. Social media has connected us with a lot of parents that have done this procedure.

I think that when children see another child with medical equipment or physical limitations, they can get a little scared off. I think a lot [of how children react] depends on their parents [reactions]. If you pass another child with a physical disability or medical equipment with your child, just smile and say “hi.” Then you are showing your child that it's OK and it's not scary. A lot of adults are unsure what to say, but what would make us feel most comfortable is just not being ignored. And not being stared at. Just pass and smile and say, "Hi."

I think when people talk to Gadi they often don't realize that he understands what you're saying, just because he’s sitting in a wheelchair. I think if they would take a minute to actually talk to him they would realize that he's a smart kid — that he really is a very typical toddler. Its important for people to realize that disability may change a person's looks and abilities on the outside but not on the inside.