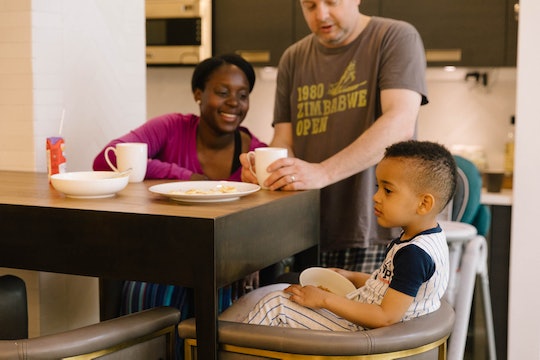 The Real Reason Kids Hate Vegetables, According To Science

Today, my 8-month-old will eat whatever uber-healthy purée I put in front of her. But I know that if she's anything like me, a picky eater lurks behind that toothy smile. I see my future in friends with toddlers, who lovingly prepare kale and Brussels sprouts and broccoli night after night, only to wonder, as their kids dig into the mac and cheese, what is the real reason kids hate vegetables?

It turns out, it's totally normal (not just a cliché), and you can blame evolution (at least for some of it). According to Popular Science, the human species evolved surrounded by poisonous plants, and your kid's addiction to sweets might be a survival instinct — very few poisons taste like ice cream, after all. On the other hand, poisons do come in bitter and sour flavors — as do vegetables. To make matters worse, kids have more taste buds and a better sense of smell than adults, so that bitter tang in the sautéed kale you love so much? To the green-eggs-and-ham set, it's just plain bitter.

The Washington Post reported that pickiness usually rears its choosy head around 18 months, and worsens between years 2 and 6. Wondering why your kid won't even try the garlic zucchini? According to the aforementioned article, scientists call reluctance to try news foods 'food neophobia,' and again, it's not your kid's fault; it's likely evolution's way of protecting them, basically saying to your newly autonomous being, hey kid, stick with what you know: it hasn't killed you yet, right?

Of course, you can't feed your kid ice cream day and night (or mac and cheese, or buttered noodles, or toast with jam), because unlike your prehistoric ancestors, you know health is a big deal. Less than 15 percent of children eat the recommended five servings of veggies per day, reported Eureka Alert. While your child was undoubtedly born with a preference for sweeter things, it's possible to guide them to better dietary choices.

For kids, food is an emotional issue. Just think of all those fairytales featuring poisoned apples and houses made of candy. Self-feeding is a major milestone for your child and a major step on their way to independence. Unfortunately, food is emotional for parents, too, and often parents unwittingly engage in behaviors that will make their kids like vegetables even less than they're primed to do. Ever try to trick your baby into eating one more spoonful of turkey stew purée? Or prevail upon your toddler to take just one more bite? Studies show that such pressure — think, "finish your soup" — creates negative emotions towards that food, and contributes to food aversions that last into adulthood, noted Appetite.

So don't pressure your child into eating their greens, or turn your table into a battleground — it just won't work. The book Becoming The Parent You Want To Be by Laura Davis and Janis Keyser advised parents to model good eating themselves ("mmm, this salad is delicious"), and keep offering vegetables without forcing the issue. It may take your child four or five tries to get to like a new food, but if that new food is a snap pea, it's worth it, right?

Davis and Keyser also suggested cooking with your young child, as they'll really want to like any food they made themselves. Finally, it's important to understand that while you're a powerful force for good in the creation of your child's lifelong eating habits, the television (and its gooey Cinnabon commercials) is actually your nemesis. Kids are more affected by food advertising than adults, according to Science Daily, and really, once they get a load of those Frosted Flakes, what are the chances they'll want to try your overnight oats?

Despite genetic predispositions, advertising pressure, and the high fructose corn syrup lobby, your kids can learn positive lifelong eating habits, and you're the professor. (No pressure, moms and dads.) Don't force kids to eat when they're not hungry, and don't wage a vegetable war. Personally, I may take a leaf from Roald Dahl's parenting practices. In an interview on the Sporkful podcast, Dahl's daughter mentioned that the wizard behind Charlie's Chocolate Factory convinced his kids to eat red cabbage by claiming the Queen herself had sent it as a special treat, straight from the Buckingham Palace gardens.