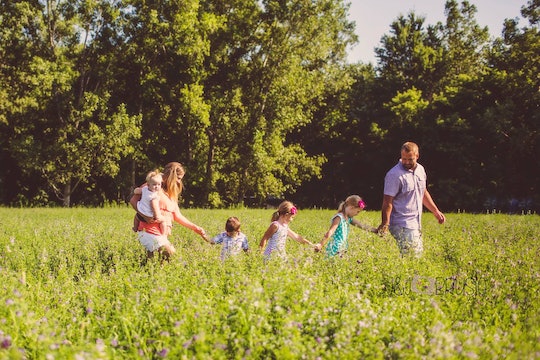 Whatever you do, don't fight in front of your kids, or something like that, so the common advice for parents goes. I know a lot of the experts say that you're not supposed to do it, but in all honesty, my husband and I fight in front of our kids on a regular basis and I think it's beneficial. I think it's actually healthy for my kids to hear a discussion modeled in a way that gets resolved.

Growing up, in my house, fighting happened a lot among my parents, but especially between my mom and me. And all throughout that time, I never really learned how to "fight fair." I learned very quickly how to avoid fighting, but all that does is make you stuff and bottle down feelings until you explode and say things you don't mean in a fit of anger or passion, and then nothing gets resolved. So when I got married, my husband and I were both still pretty young and I had zero constructive communication skills whatsoever. In those early days, I'd shut down, or sulk, or pick fights about stupid things in order to avoid talking about the thing that I was actually upset about. I'd blame or play the victim or suffer in silence with my martyr card because that's all I knew how to do. And I completely credit my husband with teaching my how to fight like a grown adult, because he wouldn't take any of that crap from me. He refused to let me retreat, or run away, and he certainly wasn't satisfied with an "I'm fine" comment. My husband, essentially, taught me how to fight fair and I know that it's completely changed our relationship.

It took years, but I finally learned how healthy it could be to fight in a way that didn't leave me sobbing for weeks with a pit in my stomach. I finally learned how I worked — that it was better for me to discuss things calmly when I was first starting to feel upset rather than wait until I really got angry and things boiled over. I learned what triggers my husband responded to, so I could avoid those, and learned what triggers I responded to, so I could help guide my husband to avoid those.

For the health of our family and our marriage, it's OK to let our kids see us fight because, well, that's what people do and then hopefully, they move on. That's a good life skill, in my mind, and one I want my children to grow up seeing.

So today, as a partner of almost nine years and a parent for basically the same (hello, shotgun wedding!), I actually pride our relationship on our ability to have healthy fighting skills. For us, there's now a huge difference between a pointless screaming match and having a healthy discussion about what's bothering one of us. And a majority of the time, our fights take place in front of the kids. Do I wish sometimes we could wait until they were in bed to hash out our differences? Sure, but life happens and that's not always possible. I think that for the health of our family and our marriage, it's OK to let our kids see us fight because, well, that's what people do and then hopefully, they move on. That's a good life skill, in my mind, and one I want my children to grow up seeing, provided the fighting is done in a productive and respectful manner.

I even asked my 8-year-old daughter how it makes her feel when she sees us fight. She's usually the one who, when we happen to be at the dinner table or in the kitchen "discussing" things, tells us to simmer down. She said, "I feel kind of embarrassed, because I don't like to see my parents fighting because I just want them to love each other, but everyone get in a fight and you always make it better." I want to model a healthy relationship for my kids, and healthy relationships include fights. Clueing my kids into that reality allows them to see that it's healthy and normal to disagree and fight over those disagreements.

I want my kids to learn that fighting with their dad doesn't mean an endless screaming match that will leave them needing therapy forever; it can be as simple as discussing something we disagree on in a healthy and productive manner.

I'm a big enough person to admit that her words smarted me a bit. It's not easy to hear when you're messing up as a parent, but I also know that disagreements and discussions are a part of life. I don't want her or any of my children thinking that fighting or disagreeing is the opposite of loving someone, because I'd much rather have a constructive dialogue (even if it looks like a fight) with my loved ones — kids and husband included — than have everyone learn to practice avoidance and shut down.

I want my kids to learn that fighting with their dad doesn't mean an endless screaming match that will leave them needing therapy forever; it can be as simple as discussing something we disagree on in a healthy and productive manner. I hope that by modeling "fighting fair" to my kids, they will also grow up learning how to air grievances and talk through solutions with their own partners someday if they have them.

In my family, I hope we can be both lovers and fighters. And that's a really, really good thing for my kids to see.

More Like This
Stepmom Quotes & Sayings For Every Occasion
17 Best Potty Training Products For Toddlers
From Captions To Gifts, These Are All The Kindergarten Graduation Ideas You Need
43 Instagram Captions For National Brother’s Day That Say It All