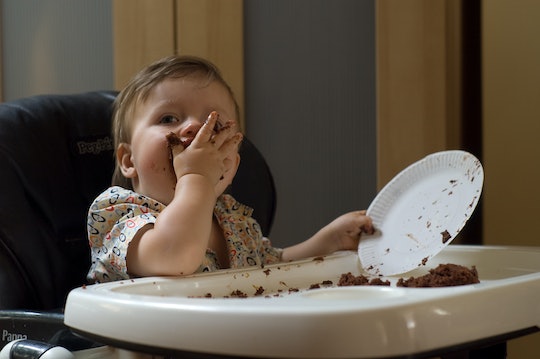 The Real Reasons Why I Let My Baby Feed Himself

I read a ton about babies while I was pregnant, and I do mean a ton. I thought that I had a pretty good handle on all of the information out there, but it turns out there where huge gaps in my knowledge. Knowing that I planned to breastfeed, I didn’t really have a handle on the various infant feeding strategies that existed, and solid foods seemed a ridiculously long ways off. Looking back on it, I guess I assumed that we would make our own hippie baby food, but hadn’t considered it farther than that. So I was surprised and taken aback when, at my precious child’s three-month check up, our pediatrician said. “you know when to start rice cereal and stuff, right?” My wife and I just stared at her like a couple of clueless idiots. After going home and doing my research and talking with my incredible midwife and some amazing friends, we settled on baby-led weaning, which means that I’ve never once spoon-fed my baby, because he’s always fed himself. There are so many benefits to our choice, but the one reason why we let our son feed himself is because it empowers him to make his own food choices even at this very early age.

Instead of me, or my wife, sitting in front of him feeding him bites of baby food off a spoon, we all eat together. We set him up in his high chair, put a bit of whatever we’re having on his tray, and then we sit down to eat. I’d always imagined that, when I had kids, dinner would be a social activity for the family. But I had never imagined that the family dinners of my dreams would start before my kid was even 1 year old! It’s honestly been incredible. It’s not a completely flawless system, and it doesn’t go perfectly every meal — sometimes he throws all of the food onto the floor and screams at the top of his lungs because he doesn’t have any food — but for the most part getting the baby dinner is relatively hands free.

I can be an uptight, and sometimes even controlling, person. Of course I bring that to my parenting. And whereas being uptight about things like safety can be an asset, my kid doesn’t need me obsessing over exactly how much he’s eaten every day.

He watches us eat, and merrily chomps away at his meal, occasionally laughing at us or waving his arms in the air to express his enthusiasm about a particular flavor or texture. It gives me and my spouse a chance to talk over dinner (a rare miracle!) and is important quality family time for all of us.

And while he’s squishing mashed potatoes between his fingers, picking up whole black beans, and slobbering spinach leaves, he’s learning. My son has to learn to do everything for the very first time. Development of motor skills is huge, and something as simple as picking up an object and putting it where you want it takes time and practice to master. Sure, my kid can work on those things while playing with blocks on the floor (and believe me, he does) but why not at meal times too? Eating is exciting and motivating for him. It’s fun and satisfying to watch him proudly pick up something small and lift it to his lips, and to see the look of triumph on his face when he manages the maneuver. He’s 9 months old, and he’s been able to use a spoon by himself for at least two months now. I love that he’s learning things like that a little on the “early” side. And he gets to feel independent and important, so it’s really a win-win.

It’s all about trusting kids and letting them get to know their own hunger cues.

On top of this, we let him try almost everything that we eat. We don't share our precious coffee with him, we don't cover his food in hot sauce, we don't give him really sweet sugary things or things that are unsafe for him at his age (like honey eggs). But other than that, it’s kind of anything goes in our house. If we’re having pizza, he’s having pizza. If we’re having spicy Indian food, he’s having it too. Soup? Hand him his spoon! Salad? This child loves greens.

Letting him take the lead, and giving him more options, has allowed him to branch out and try a great variety of flavors and textures. It takes the pressure off me, as a parent, to try to “get him to like” certain things, and allows him to expand his palate while it’s at its most expansive. I’m not saying broccoli will be his favorite food forever, but it’s nice to know that we’re starting with a good base. It’s not so much that I smugly think that this style of infant feeding means our kid will never be a picky eater. It’s more that, even if he decides he doesn’t like certain foods when he’s older, at least it won’t be because they’re foreign and intimidating.

I don't want my child to ever feel that eating is a chore, or that his worth is tied to the crumbs left behind on his plate.

I'm also a firm believer in the Ellyn Sattler’s Division of Responsibility in feeding. The basic idea (and it changes a little bit as kids grow) is that parents are responsible for making sure a variety of nutritious foods are offered to children, and children are in charge of whether or not they eat, and how much. I love the division of responsibility in part because it’s all about trusting kids and letting them get to know their own hunger cues (which helps them to know when they’re full down the line) but also for deeply personal reasons.

I was a horrifically picky kid, and I remember a lot of my childhood as a constant battleground around food with all of the “just three more bites!” and “you can’t get up from the table until you eat something” and “you used to like tacos!” arguments you can possibly imagine. My parents handled it the best they could, but it was brutal, and it was painful and frustrating on all sides. So having information — grounded in science, no less — that says I can trust my kid and that dinner time doesn’t have to be a high pressure game of chicken is honestly a huge relief.

And for me, letting my baby feed himself is a huge part of trusting him. I can be an uptight, and sometimes even controlling, person. Of course I bring that to my parenting. And whereas being uptight about things like safety can be an asset, my kid doesn’t need me obsessing over exactly how much he’s eaten every day. The fact that I’ve never been in charge of how much my child eats means that it isn’t something I'll eventually to let go of. He’s free to eat what he wants and disregard what he doesn’t. I don't want my child to ever feel that eating is a chore, or that his worth is tied to the crumbs left behind on his plate. I want him to know learn that food fuels his body, and gives his muscles strength. So far he mostly likes everything, which is great, but I know it won’t always be that way. My hope is that, when he goes through difficult eating periods as a toddler, I’ll be able to step back. I’ll understand that he knows his body and that I don’t have to wrestle “just a tiny bit” more food into him. And these early months of watching him figure it out — with joy and excitement and wonder — are definitely helping me to feel more confident in that. He’s also always breastfed on demand, so it just makes sense to me that he would also have control of all of his other food consumption.

I have this 9-month-old baby, this teeny tiny little person, who is fiercely independent and excited about the world — and I love that about him. He’s never been fed by anyone other than himself, and it is an absolute joy to watch him explore the many wonders of food without hangups or issues. Yeah, it may be really, really messy, but you know what? It’s still worth it.