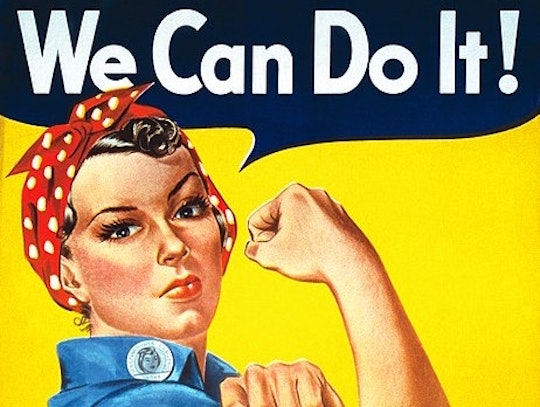 Most Americans are probably familiar with "Rosie the Riveter" — the woman in that famous World War II-era poster with a bandana on her head and the sleeve of her shirt pulled up to reveal a flexed arm muscle? Yeah, that bad*** lady. "We can do it!" the iconic sign reads. The persona of Rosie the Riveter was initially created to motivate women to join the workforce when men left their jobs to fight during World War II. However, she has become a go-to symbol of feminism over the years. Interestingly, though, it was only in recent years that the real-life person was recognized as the woman in the iconic poster by J. Howard Miller. On Saturday, Jan. 20, the real "Rosie the Riveter" Naomi Parker Fraley died at the age of 96, according to The Cut, and so has a piece of history.

In late 1941, the United States joined World War II — and because men left their jobs to fight for their country, the government and industrial leaders alike called on women to fill these vacant positions. And roughly 6 million women did just that, according to History.com. In 1942, the Westinghouse Power Company commissioned J. Howard Miller to boost employee morale, and his "Rosie the Riveter" poster was born. It was during the feminist movement of the 1980s that Miller's poster was adopted as a modern symbol of female empowerment. And this symbol lives on today.

At the age of 20, Fraley and her sister Ada started working for the armed forces during World War II, as reported by The Cut. The sisters were employed in the machine shop of the Naval Air Station in Alameda, California, the publication reported. Back in 2011, the sisters attended a reunion for women war workers when they spotted a newspaper photo — which was credited as the model for "Rosie the Riveter." It turned out to be Fraley. So how was she not known for all of this time? Apparently, the photo was mis-credited as Geraldine Doyle for all those years, according to The Cut.

Parker-Fraley attempted to set the record straight, but all seemed hopeless — until in 2015, when she met a professor of communications, James J. Kimble, with Seton Hall University in New Jersey. Kimble had been on a mission to identify the woman in the photo and eventually wound up at Parker-Fraley's doorstep, as reported by People. “She had been robbed of her part of history,” Kimble told People. “It’s so hurtful to be misidentified like that. It’s like the train has left the station and you’re standing there and there’s nothing you can do because you’re 95 and no one listens to your story.”

In 2016, Kimble shared Parker-Fraley's story in the journal Rhetoric and Public Affairs, where it quickly attracted attention, according to People. The piece effectively debunked the claim that Geraldine Hoff Doyle was the inspiration behind "Rosie the Riveter." Instead, Parker-Fraley — who was divorced once, widowed twice and spent the majority her life working as a waitress, according the publication — finally got the recognition she deserved. “The women of this country these days need some icons,” she told People in 2016. “If they think I’m one, I’m happy about that.”

In the wake of Parker Fraley's death, many took to Twitter to pay tribute. "RIP to a true icon Naomi Parker Fraley aka Rosie the Riveter. She passed away today at 96," one person tweeted. "The original inspiration for 'Rosie the Riveter' has passed away in Longview, WA at the age of 96," another Twitter user wrote. "Glad she was around to see all the women empowerment she inspired and to know it will continue through the #MeToo era. RIP Naomi Parker Fraley. You changed a nation."

It's awesome that Parker Fraley was ultimately able to prove she was the woman in the photo — even though it took seven decades for the true identify of the woman who inspired "Rosie the Riveter" to come to light. And now that's she's gone, it almost seems as if a piece of history has left us, too. In the wake of Parker Fraley's death, one thing's for sure: "Rosie the Riveter" will continue to inspire generations of feminists to come.