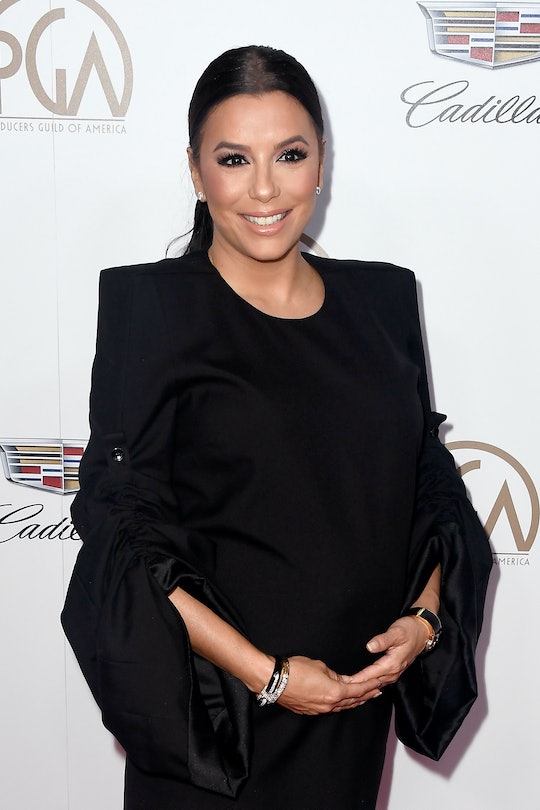 In case you missed the exciting news, Eva Longoria's representative confirmed in December 2017 that she's pregnant with her first child. Longoria, who is thrilled about the prospect of motherhood, will welcome a baby boy with her husband, José Antonio Bastón, sometime this spring. Amid all the excitement and congratulations, however, some people are questioning why Eva Longoria waited to have kids until age 43 (she just celebrated her birthday on Thursday). Although this tidbit of information is no one's business, Longoria explained her reasoning in an interview with InTouch Weekly on Wednesday. Apparently, Longoria has a very *interesting* take on what type of situation babies should be born into, and some parents might find her view offensive.

For some mind-boggling reason, people tend to be shocked whenever an actress they think is "older" (this is subjective, btw) announces she's pregnant. Of course, Longoria is no exception to this ageist phenomenon, and she's regularly asked about her age in interviews about her pregnancy. So, it's no surprise that Longoria already had an answer prepared when she was asked about giving birth at age 43. "Women are having babies later and later, so I didn’t have that 'biological clock ticking' pressure," Longoria told InTouch Weekly. Sounds reasonable, right? Many parents have biological children later in life via a gestational carrier or through the process of in vitro fertilization (IVF). Yay for medical advances.

But it's what Longoria added to her statement that some parents might take umbrage with. "I [also] wasn’t with anybody for a while," Longoria elaborated, according to the Daily Mail. "I think babies are a product of love and partnership."

*Record scratch* Say what, now? I think it's a safe bet Longoria might ruffle some feathers with her remark.

For starters, many parents out there elect to have children as single people. Take actress Lucy Liu, for example. Liu welcomed her son via a gestational carrier in August 2015 as a single parent. "I’m a single mother who had a baby through a gestational carrier, and I know that people had opinions about how it was done,” Liu told Yahoo Celebrity in May 2016 about the backlash she faced for her decision. “And I think it’s really important that people also embrace that it’s not about those details, it’s about how you carry on from the point of having your child and loving your family.”

I think Liu touched on something really important when she said that being a parent is about the love you give your child. A child doesn't need to be born from romantic love to receive love, nor is a child less loved if they're born to a single parent. Most importantly, Liu's family is undoubtedly a product of love, despite the fact that it doesn't adhere to Longoria's idea of what love is. I think Angelina Jolie, Charlize Theron, and all the other parents out there who happily chose to be single parents would agree with this sentiment.

Secondly, partnership is a broad term that each parent might view differently. For Longoria, partnership clearly means a romantic partner, because she waited until she met Bastón to have children. But for other parents, partnership might mean co-parenting with a friend or relying on members in their community for added support. Many people parent without romantic partners, and their families aren't any less legitimate or ideal because of this fact.

Lastly, what does Longoria think about kids who are born to a single parent or who come from a non-traditional family? Although I don't think Longoria meant any harm by her comment, I'm not sure she considered beforehand what her remark might imply. Does Longoria think that babies born to romantic partners are superior to babies who aren't? Like I said, I don't think Longoria intended to offend fellow parents with her words — I'm just pointing out how other people might perceive her comment.

The important takeaway here is, all families look different and there's no "right" way to have a baby. While Longoria is entitled to her own opinion about how one should bring a baby into this world, it might be beneficial for her to converse with other parents who chose to go down a different path.