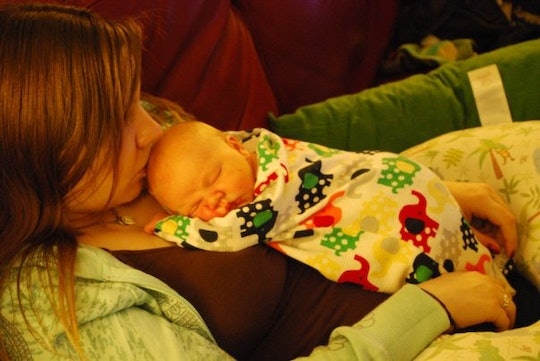 Our midwife recommended Dr. W as someone friendly to natural remedies, reluctant to give antibiotics, and friendly to alternative vaccine schedules. All these things were important to my husband and I back when we were entering parenthood for the first time (though now we fully vaccinate on schedule). So we made an appointment to talk to her before our baby was born. She was sweet, but in retrospect, probably thought we were "cute, paranoid new parents" just trying to do everything right. We had no idea that later on, I'd fire her. But the reason I fired our pediatrician had absolutely nothing to do with her care. It was just the best decision for our family at the time.

Our first son, Blaise ended up born in the hospital, so we had dealings with Dr. W much, much sooner than we thought. She was kind. She talked in a sweet, high voice to him, and clearly adored babies. She never harassed us for not getting the Hep B vaccine (though the Mayo Clinic recommends the Hep B vaccine for all newborns, babies, children, and teens up to 19 years old). She talked over every other vaccine with us, and accepted our decision to delay vaccinations (though she clearly wanted us to say yes). As Blaise grew, she did everything a hippie pediatrician is supposed to: She never tried to retract his foreskin after we decided not to circumcise. She didn’t tell us to feed him solids at four months. I begged her to research infant reflux from the sources I brought her, and she ended up medicating Blaise for reflux with the medications and the dosages I wanted. She was amazing.

Dr. W was hard to get hold of. We’d call, talk to a nurse or leave a message, and not get a call back for at least 24 hours. That’s a long time when you have a sick baby. When we went into the office, the nurses didn’t keep the sick and well sides adequately separated. Sick kids ran into the section where we sat with our little baby, waiting for his physical. And the staff could never find our information. They were slow. They were rude — not overtly, but I often felt like every comment came with a hefty dose of side-eye. We waited an average of a half an hour beyond our appointment time, and sometimes up to an hour.

We told her, over and over, how consistently rude the staff was to us. She always apologized profusely and always said she’d talk to them. When we complained about how long it took to get a call back, she apologized again. But nothing changed.

But Dr. W got our second son released from the hospital after a little more than 24 hours, like we’d begged. I hate the hospital. I can't sleep there, and it feels like a factory to me, so I just wanted to go home and co-sleep in peace after giving birth to August, and she made it possible for us to do just that. She stood firm on our choices not to give a Hep B shot again. And she was thrilled to see baby August the day after his birth. Dealing with the less-than-stellar treatment at the practice where she worked seemed worth it. The benefits of her compassionate care outweighed my growing list of concerns.

Now, I had two kids to haul to the pediatrician. Blaise was old enough to play with those toys the sick kids were snotting all over. I still had trouble getting hold of the staff, especially when my kids were sick. August had persistent ear aches and needed to be seen about once a month. I’d call, wait, wait, wait, call again, wait, wait, wait, tell the nurse I needed a call back urgently, and then finally, give up and call the main line to make an appointment. Because this was an emergency appointment, I’d wait for over an hour. If my husband was home, I'd have him wait inside, while I stayed out in the car with the kids. He’d text me when they finally called our name.

Each time she saw us, Dr. W was as sweet as ever. The kids adored her. She always asked after the intangibles: their favorite toys, their favorite books. We told her, over and over, how consistently rude the staff was to us. She always apologized profusely and always said she’d talk to them. When we complained about how long it took to get a call back, she apologized again. But nothing changed.

I told her I couldn’t wait for two hours in a room filled with dozens of other sick children. But mostly, I said, I was sick of long waits for call backs, horrible wait times for appointments, and the feeling that no matter what happened, her staff didn't care about mine or my kids' needs. I stressed that none of the issues had anything to do with her care or consideration. But I told her we'd waited long enough for changes that never came.

Then I got pregnant for a third time. Dragging two sick kids to the doctor’s got way, way, way harder. One day, August had a high fever, and I had to bring him in. We sat on the sick side, like we were supposed to, and I let the kids play with the iPad and my phone so they wouldn’t touch anything. An hour passed. I kept going up to the window and asking what was going on. There was some problem with my insurance. There shouldn’t be any problem with my insurance, I said to the staff. But they only responded with more side eye. So I went back to my seat and we waited. Someone mentioned that their kid had chicken pox. My kids were still unvaccinated at the time and I was terrified, even though it was our decision to delay vaccinations. We waited for another entire hour with me trying to keep a 2 year old on my pregnant lap while I tried to steer us clear of the child with chicken pox.

That's when I realized I couldn’t do it anymore.

I told Dr. W that we'd be finding another doctor ASAP. She was so upset, because she’s sweet, and asked why. I told her I couldn’t wait for two hours in a room filled with dozens of other sick children. But mostly, I said, I was sick of long waits for call backs, horrible wait times for appointments, and the feeling that no matter what happened, her staff didn't care about mine or my kids' needs. I stressed that none of the issues had anything to do with her care or consideration. But I told her we'd waited long enough for changes that never came. They needed to fix the issues with their practice.

She offered me a private number to call instead of the nurse’s line. But I stood firm. I was done. I was going to The Big Practice Everyone Goes To and that was it. They had separate rooms for sick and well sides. Their staff was polite and kind. And you always, always reached a nurse when you called. I hugged Dr. W goodbye.

Looking back on the situation, there's only one thing I would have done differently: I would've left sooner.

Getting the medical records for both of my boys proved difficult. I had to fill out forms at both doctors’ offices authorizing their transmission and receipt. The new doctor had separate sick-and-well rooms, no toys, and came highly recommended by my OB-GYN friend. He wasn’t as warm. The kids didn’t like him as much. But we always got a human on the phone, and never waited for an appointment. I missed Dr. W. But I was grateful.

Looking back on the situation, there's only one thing I would have done differently: I would've left sooner. I think we could've worked out an earlier hospital discharge with my second son, and we shouldn't have had to put up with long call backs and sick children so close to ours. We'd talked to Dr. W about our concerns many, many times. We'd complained to her about the wait times. She always said she'd look into it, but nothing would change. Though I don't blame her at all for what happened, I am disappointed because I constantly felt like the care and treatment of children and families came second. We shouldn't have had to put up with it at all, much less for as long as we did. No one should. So we switched. And I'm still so glad we did.