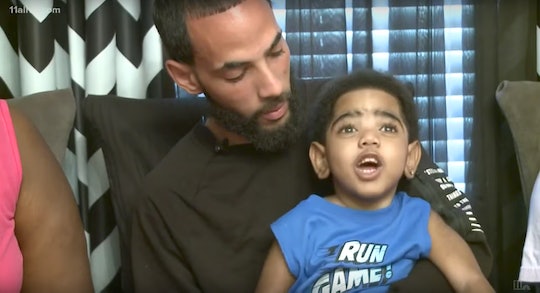 Born without kidneys, A.J. Burgess was all set earlier this month to receive a life-changing transplant from his father. But, now, the 2-year-old can't get a kidney donation from his dad anytime soon for a reason that has nothing to do with his health and wellbeing, or Anthony Dickerson's ability to supply the organ that could dramatically improve the toddler's quality of life. Instead, Dickerson was arrested ahead of the scheduled Oct. 3 surgery for violating his probation, according to CBS News. And even though he's since been released and wants to go through with the surgery, Emory Healthcare in Atlanta has called it off for the time being. The situation has left A.J.'s family desperate to get the toddler the medical help he needs.

Their best hope of accomplishing that was, and is, finding a way to ensure that Dickerson can donate one of his kidneys to his son. After all, he's a perfect match and more than willing to do what it takes to give his son a better chance of living a healthy life. But, in an email statement to Romper, Emory Healthcare somewhat explained the decision (without specifically addressing A.J.'s case, for patient confidentiality reasons):

Emory Healthcare is committed to the highest quality of care for its patients. Guidelines for organ transplantation are designed to maximize the chance of success for organ recipients and minimize risk for living donors. Because of privacy regulations and respect for patient confidentiality, we cannot share specific information about patients.

Of course, the hospital's statement gives no indication that there is a medical reason why Dickerson's having been incarcerated or violating the terms of his probation would disqualify him from being a donor for his son. And, after his release, the hospital said in a letter that its transplant team wanted to see "evidence of compliance from his parole officer for the next three months," WXIA reported. After that, they plan to "re-evaluate" Dickerson in January 2018.

A.J.'s mother believes that delaying the transplant until 2018 could be too late. Her son weighs only 25 pounds at age 2, suffered a stroke two months ago, and now requires bladder surgery as well, she told WXIA. "It's about my son," Carmellia Burgess said, according to the station. "He's been through a lot. It's like we've been waiting on this. And Dad making a mistake shouldn't affect what he wants to do with our son."

According to The Atlanta Journal-Constitution, Dickerson was released from jail this month, having been charged with fleeing or attempting to elude a police officer and possession of a firearm or knife during the commission of attempted felonies. It's unclear, legally, what these charges have to do with Dickerson's ability to help his son in a medical situation. Romper has been unable to reach Dickerson directly for comment.

On a GoFundMe page dedicated to raising money for her son's medical care, though, Carmella Burgess doesn't mention that part of the story. Instead, she details how, as a single mother, she has not been able to hold a steady job because of "numerous doctor's appointments and the smallest thing causing him to end up back and forth to the hospital." Adding to her challenges, she has other kids to take care of, too.

If you want to support the family, you could donate to the GoFundMe page. The family also started an online petition to implore the hospital to allow the surgery to happen sooner. The family's next hope is to get A.J. on a kidney transplant wait list — but the median wait time for a kidney transplant is five years, according to the Gift if Life Donor Program.

Hopefully, A.J. won't have to wait that long.