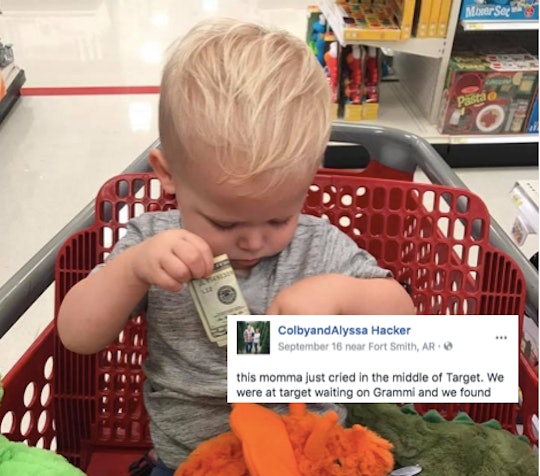 As parents of young children know all too well, being approached by strangers while out and about can be, uh, awkward. Some people are overly touchy with babies (who knows where their hands have been?) and others feel the need to offer unsolicited parenting advice as your toddler is melting down in the cereal aisle. Still, others manage to impact you in ways that you'd never expect — and the reason this stranger gave a toddler $20 in Target will both break and warm your heart.

Alyssa Hacker was at Target on Saturday with her young son, when he grabbed three stuffed dinosaur toys off a shelf. In a now-viral Facebook post, the Coweta, Oklahoma mom described what happened when an older gentlemen approached them in the midst of their big decision: Which lucky dinosaur would Owen bring home today?

"This momma just cried in the middle of Target," Hacker wrote on Facebook, next to a photo of her son sharing his shopping cart with the dinosaurs. "Owen grabbed all 3 and we were trying to pick out which one he wanted when Owen abruptly yelled 'HI' at this older man walking past us. He turned around and said 'hey sweet boy' he proceeded to play dinosaurs with Owen and with this crazy world we live in I was a little hesitant as too [sic] how close he was with Owen."

Hacker was understandably cautious about the overly-friendly stranger. And I don't blame her in the least. Especially if she's seen videos like this one, which shows an attempted child abduction while a parent was standing right there. Despite the statistics on child abduction, I admit my paranoia of kidnappers — and overzealous baby-touchers — lurking in the shadows caused me to turn to baby-wearing in public every chance I got. But I digress.

Back to Target. So, a stranger was uncomfortably close to her child in public. Unfortunately, it happens to the best of us. But this mama wasn't prepared for what happened next.

"The man got his wallet out and pulled a $20 out, he put it in Owens pocket on his shirt and said 'i [sic] just lost my 2 year old grandson last week. You take this money and buy this boy all three dinosaurs' and rubbed Owens back, wiped his tears and walked off," the mom wrote on Facebook. "After Owen yelled 'thank you' the gentleman turned around and yelled boomer sooner! There is still some good in this world."

And apparently, we're not the only ones standing in a puddle of our own tears after reading this bittersweet story. In the two days since she shared the unexpected encounter, Hacker's post has managed to attract more than 285,000 likes, over 12,000 comments, and 113,000 shares. Judging by how quickly the story went viral, I'd venture to say that the power of kindness is alive and well.

I can't pretend to imagine the pain of losing a child or a grandchild, let alone one who is so young. The crushing loss of his grandson — so fresh in this stranger's mind — must have been the reason he gravitated toward little Owen. What's so inspiring about his actions, to me, is the fact that he chose to channel his grief toward brightening someone else's day, when it would have been much easier to avoid the situation altogether.

Although the reason a stranger in Target gave her son $20 was utterly heartbreaking, I'm so glad this mom decided to share her experience. His touching actions confirm that, yes, there is still plenty of good in this world.