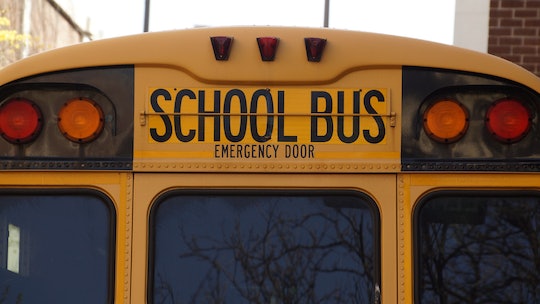 Two Trans Students Were Kicked Off Their School Bus, & It's Super F-ed Up

Schools should be safe spaces for all students, but that's hardly ever the case 100 percent of the time. In fact, sometimes it's the very people charged with caring for kids who can do the most damage. That was certainly the case when two transgender students were reportedly kicked off a school bus in New York last week. The incident is both infuriating and disheartening at the same time. That's because video of situation shows that a bus driver meanly forced two trans high schoolers off his bus for refusing to sit on the side of the aisle he'd designated for girls. But, as the video showed, the students' classmates were anything but OK with the driver's unacceptable and discriminatory behavior.

It all started last week before an after-school activity bus had pulled out of the parking lot of South Glens Falls High School. There was a holdup, it appears, because the driver allegedly refused to bring the kids home until two of them denied their own gender identity to make him comfortable. According to The Post-Star, 16-year-old Leo Washington and 15-year-old (Aaren) Layla Sweenor both identify as trans non-binary, which means they don't consider themselves to be either male nor female. They were reportedly most comfortable sitting on the boys' side of the bus, and declined to move. The driver's subsequent ultimatum, that they move or get off the bus, "was a smack in the face," Washington told the newspaper.

Ultimately, the teenagers opted to exit the bus. But not before many of their peers showed outrage over what what happening and did what they could to stick up for them.

In a video of the incident, which has since gone viral after being shared on Facebook, one student is seen standing up and telling the driver that he is discriminating against Washington and Sweenor based on their gender identities. According to Times Union, her name is Lilly Wolfe, and she is close friends with the trans students. In the background, other students sound pretty upset. "That's not right," one says. "Do you know how ridiculous this situation is?" another pipes up. And The Post-Star reported that some students even went as far as to try to show the driver the section of the student handbook that specifically prohibits such discrimination.

So, let's just take a second to recognize that a lot of the students on that bus are pretty damn awesome.

Still, the two students on the receiving end of the discrimination ended up getting off the bus alone after giving the driver their names, as he'd reportedly demanded. Once back in the parking lot, the students quickly met with a school administrator, according to a South Glens Falls School District statement. (Romper reached out to the high school for additional comment regarding the incident and has not yet heard back.)

The district has taken the position that Washington and Sweenor had "every right" to remain on the side of the bus the driver had decided was for boys, and is now "working with the driver on how this situation could have been handled in a much more appropriate manner," according to the statement.

And Superintendent of Schools Michael Patton said in the statement that the district does not tolerate such discrimination against students:

All students need to feel safe and supported when they are in our classrooms, on our school property or riding in our school buses. We will continue to train and educate all of our students and adults about protecting the rights and needs of all students. We will continue to work hard in creating a supportive learning environment that is safe and free of any form of discrimination. I hope this unfortunate event can be used a learning experience for all.

There's no denying that this was a terrible situation for the trans students involved, and they absolutely deserve better. But it's also encouraging to know that their classmates came together in their defense as they did, proving that overall acceptance is in our sights.