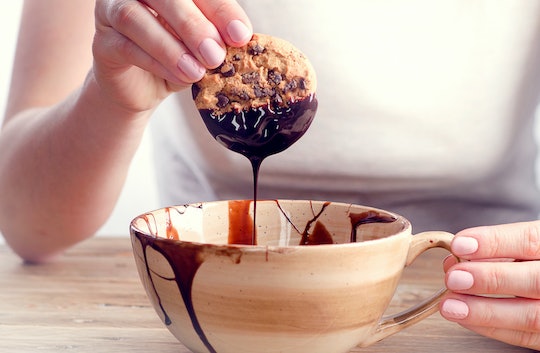 Ask anyone who menstruates, and they'll tell you that chocolate and periods go together like water and fish. In fact, for millions of people, craving cocoa goodness is just a normal part of menstruation. Why? Many health experts say hormones are the culprit. But new research may upend what we know about menstrual chocolate cravings; according to a recent study, why you crave chocolate during your period may have nothing to do with your body or science.

Researchers at the State University of New York (SUNY) at Albany found that menstrual chocolate cravings are not common among global cultures, and seem to be an American phenomenon, according to Philly.com. The new study, published in PLOS One, discovered that foreign-born Americans are far less likely to crave chocolate during periods than participants with U.S.-born parents — 17 percent compared to 33 percent. Forty-one percent of second generation Americans also reported wanting chocolate during that time of the month.

So are menstrual chocolate cravings really a thing? Lead researcher Julia Hormes, assistant professor of psychology at SUNY-Albany, suggests they may be driven more by culture than physiology. Hormers said of the study, according to Philly.com,

The findings add to growing evidence suggesting that the craving construct, or at least certain elements of the craving experience, may be uniquely meaningful to North America.

Of course, the PLOS ONE study doesn't invalidate the existence of period cravings. During menstruation, your hormones go haywire. According to Women's Health, the stress-related hormone cortisol spikes, while serotonin — the one that controls your mood balance — takes a nosedive. Your body ends up craving fatty and sugary foods because of these see-sawing hormone levels. These types of treats, in turn, help up your serotonin levels and decrease production of cortisol, Women's Health reported.

So you may truly want to eat chocolate during your period because that's what your body wants. But chocolate cravings as a widespread phenomenon does fall apart when you take into account the discrepancies identified in the study.

Hormes has an interesting theory as to why more people who menstruate desire chocolate during their periods. People in the United States face intense social pressure to stay thin — an unrealistic and dangerous demand that comes from friends, family, and the media alike. And often, that means denying yourself certain food, sometimes to unhealthy extremes. According to the American Council on Science and Health, Hormes believes Americans who menstruate may consider their visit from Aunt Flo as a permission to eat treats they consider "forbidden" every other day of the month.

In a society that emphasized the ‘thin idea’ of female beauty, women may view menstruation as a socially acceptable excuse to indulge in otherwise ‘taboo’ food.

In other words: You're bound to want certain foods during menstruation because your hormones are out of wack. But whether or not you're really craving chocolate is up for debate. Still, don't let that stop you from eating that chocolate bar. It's delicious and you deserve it.