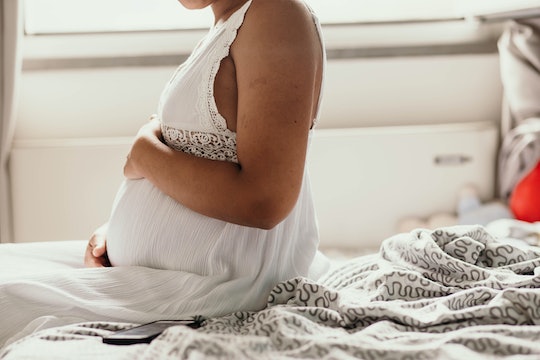 The Reason You Have A High Sex Drive During Pregnancy

First, there’s the emotional factor. During these nine months, a woman can feel more bonded to her significant other, and this intimacy can spark a heightened sexual desire. Then there’s the scientific rationale. Live Science notes that oxytocin, also known as the love hormone, is abundant throughout a woman’s pregnancy and can increase a woman’s need for intimacy. Not to mention research has found that oxytocin increases muscle contractions during orgams, resulting in a more pleasurable O.

A woman may also experience heightened estrogen levels throughout her pregnancy, which leads to increased blood flow and secretions in the vagina. This is called Chadwick’s Sign. The swelling of your vaginal canal and clitoris, combined with increased lubrication, can really intensify your orgasms. How can a woman say no to that?

So what does this mean for you? Well, it depends. Some women will happily throw down in the sheets (or with the help of a battery-operated friend) to satisfy their news sexual desires. But other may be be a bit more hesitant, worrying that pregnancy sex will harm their baby. Normally, sex during pregnancy does not harm your baby, but some women are at higher-risk for complications such as bleeding and miscarriage. In that case, an OB-GYN will give specific advice such as to limit or omit sex all together.

Sex during pregnancy is generally safe, however, and is ideal for satisfying your libido. It can increase intimacy with your significant other before entering the world of parenthood. In her essay, ‘The Pregnant Housewife,” Rachel Kramer Bussel recalled how her higher sex drive helped her connect to her SO.

So if you’re pregnant, more turned on than ever, and have no complications, then you should enjoy this time of sexual healing.

More Like This
Fun, Sexy Maternity Lingerie, For When The Mood Strikes
What Foods Fight Nausea During Pregnancy?
Sex & The Single Mom: Grieving Divorce
Why Your Vagina May Be Itchy After Sex & What To Do About It
What Parents Are Talking About — Delivered Straight To Your Inbox