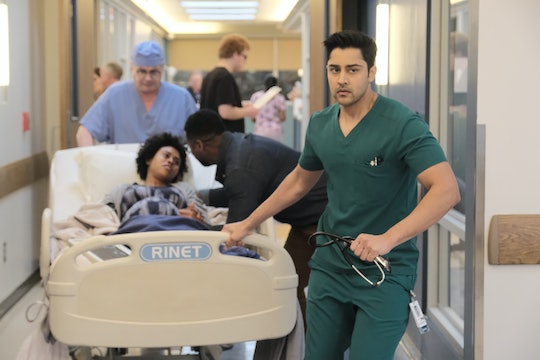 Motherhood Mortality Got Real On This Episode Of 'The Resident'

April 12, 2016, was supposed to be one of the happiest days of Charles Johnson IV's life. He and his wife Kira Dixon Johnson had always wanted two sons, and their dream was about to become a reality. Kira had a routine, scheduled C-section that afternoon and gave birth to her son Langston — but she never returned home. Three years after Kira's death, the April 14 episode of The Resident showed maternal mortality reality — and it's more than just statistics. Through a fictionalized version of the Johnsons' story, the show gave the crisis a face. While dying in childbirth effects too many women in this U.S. regardless of their race, it matters that Kira was a black woman for some very alarming reasons.

According to 2018 statistics from the United Health Foundation, maternal mortality rates in the U.S. are increasing overall, and black women are about three times more likely to die from pregnancy and childbirth related issues than white women. This disparity in risk has remained the same for 60 years, according to the Maternal Health Task Force. It concluded that the United States is one of the most dangerous developed nations to give birth in. Yet, the task force cites proof that as of 2010 only 23 states have maternal mortality review boards.

These statistics may surprise and enrage you. But on your screen right now, they're just numbers. That's what makes Kira's story — and the stories of every woman who has died because of a pregnancy or childbirth related issue — so vital. Humanizing numbers sparks the passion for change.

On the episode, Dr. Devon Pravesh (Manish Dayal) admits Patient Lea Davies for an emergency C-section when he's alarmed by her baby's heart rate. He assists in the procedure, where it is established that the main surgeon, Dr. Stewart, has very noticeable racial bias. When Dr. Pravesh notices too much blood in Lea's catheter after surgery, his pleas that Dr. Stewart check on her are ignored. As the episode continues and Lea's health gets worse, pleas by her husband and Dr. Pravesh for testing are ignored as her health declines. By the time they get her to surgery to find the internal bleeding caused by a nick to her bladder, it's too late. She bleeds out and dies.

The real life inspiration for this episode, Kira, was in perfect health before her C-section. So, when her husband noticed blood in her urine after the procedure, the staff ordered a blood test that detected abnormalities, including hemorrhaging . He was then told that they would order further testing, including a CT scan right away.

The procedure was done at about 2 p.m. and by 9 p.m. no further testing had been completed, despite the fact that Charles had been watching Kira's health decline in front of him and pleading with the staff for her life. They simply told him, "Sir, your wife just isn't a priority right now." They finally took her to surgery after midnight, but it was too late. They found 3.5 liters of blood in her abdomen and she "coded immediately," according to Charles. He told his story to a government panel in 2018, and Now This News produced a video package with footage of the speech. He says, in part:

What I'm here to tell you is this. There is no statistic that can quantify what it's like to tell an 18-month old that his mother's never coming home. [There are] no matrices that can quantify what it's like to explain to a son that will never know his mother just how amazing she was. My wife deserved better. Women all over this country deserve better.

The Resident episode that tells this story, titled "If Not Now, When?" is one of the most powerful hours of television I've ever watched. That's not because other shows don't address current crises in the U.S. that are important to talk about. It's because even though the account is fictional, the writers took care to tell one true story about one woman that people can connect to. After watching the show, I knew who Kira was and I knew I wanted to help raise awareness about maternal mortality, specifically as it effects black women.

No other show in recent memory has impacted me as much — perhaps because they fictionalized small details like names and the gender of the children. The cause of the bleeding was different, but the ultimate cause of death was the same. The biggest change in the story was that a series regular character, Dr. Pravesh also tried to act as an advocate for the character of Lea. He was dismissed by an arrogant white doctor.

I imagine Charles had no medical professional fighting by his side. If he did, I would like to believe Kira would be alive. But there is no way to know, and no way to bring Kira back. There are only steps you can take to make sure this doesn't happen to any other woman.

One fact to note is that black women still have a higher risk of dying because of pregnancy and child birth than white women, even when socioeconomic factors are equalized, according to Congressman Joe Kennedy III.

"We have to be clear that even when you control for [socioeconomic] factors, a wealthy black woman with an advanced degree is still more likely to die or to have a baby die than a poor white woman without a high school diploma." Kennedy said during a congressional speech, as seen in the Now This News video. Eliminating maternal mortality for all women is the goal. But to begin, we must help the women who are affected the most and today that's black women.

There are plenty of ways to help like donating to organizations like Black Mamas Matter or writing letters to your representatives to make sure your state has a maternal mortality review board — but the best advocate is an educated one. I would first suggest watching Kira's story on The Resident all the way up until the tribute to her at the end. It's available to stream on Hulu right now.