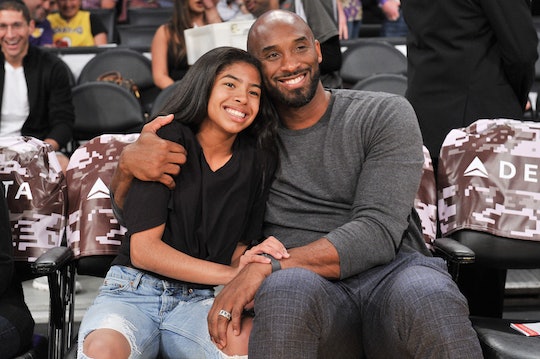 The Rock's Instagram Tribute To Kobe Bryant & His Daughter Is Perfect

On Sunday, everyone all over the world reacted to the devastating news of the death of basketball legend Kobe Bryant and his 13-year-old daughter Gianna. Celebrities like Dwayne "The Rock" Johnson grieved Kobe and his daughter's death with a beautiful tribute to the basketball superstar on Instagram, echoing the thoughts of so many.

Johnson's post serves as a simple reminder to hug your loved ones a little bit tighter this evening. In the photo, Bryant can be seen sitting next to Gianna, laughing. Their smiles are contagious — they look so happy and so blissful. "Love is forever," Johnson captioned the post.

Johnson's tribute doesn't highlight his sadness, it just pays tribute to two of the lives that were tragically lost in a helicopter accident on Sunday, Jan. 26, as CNN reported.

"What you have in your heart cannot be lost through death," another commenter stated.

Johnson is pretty familiar with Bryant's longtime basketball team, the Los Angeles Lakers. In March 2018, he gave an inspiring talk to the team (sans Bryant, who retired in 2016) before one of their games. During his talk, Johnson reportedly told players to "find your anchor each morning and live life like your back is up against the wall," according to the Los Angeles Lakers' Twitter account. "Moving forward is the only option."

Johnson's words to the team are still so pertinent, especially after Sunday's devastating news. In the face of tragedy, it's important to remember that love is forever, even if moving forward is the only option.