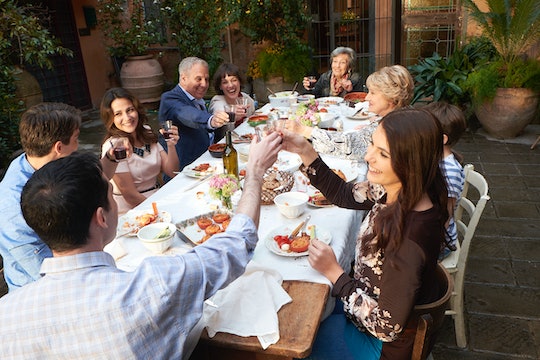 Set Your DVRs For The First Hallmark Summer Nights Movie, 'Rome In Love'

While Hallmark's Christmas in July series is well underway, the first movie in the Summer Nights series, Rome in Love, will transport you across the globe in two hours flat. The movie is based on a bestselling book by Anita Hughes — and obviously the location is a huge part of the story. But the Rome in Love cast is what truly brings the story to life.

The movie was adapted from the book with the help of the author herself. The story follows relatively unknown actress, Amelia, as she gets the lead role in a remake of an Audrey Hepburn classic, Roman Holiday. Things get a little wacky (not to mention meta) when she falls for the journalist who's tasked to interview her for an Italian magazine. Things go awry when the tell-all he's written publishes without his knowledge — after he promised she could read it beforehand. If it sounds like a summer fling gone wrong, isn't that all rom-com material? Maybe this love will last after Amelia returns to America or maybe it wasn't meant to be after all. That said, here's who stars in Rome in Love, which premieres Sat. July 27 at 8 p.m. ET.