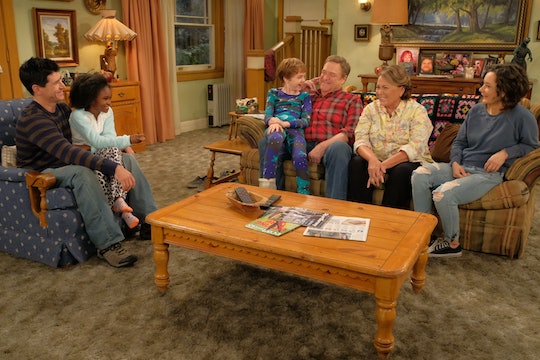 As always, Roseanne Barr has people talking. People were looking forward to the premiere of the reboot of her classic sitcom in March, but word that there's a gender non-conforming kid on the Roseanne revival and that the fictional Conner family will be supporters of President Donald Trump has basically everyone confused. As you can imagine, some people on the left are bummed that Barr's been so vocal in her support of the president, while conservatives on the right are not happy at all that the show will be "pushing a liberal agenda" by featuring a young boy who sometimes wears more traditional "girls' clothing." What a time to be alive, right?

The news broke in August that Darlene's (played by Sarah Gilbert) 9-year-old son Mark, played by Ames McNamara, will be into dressing "like a girl" on the revival of the comedy. Which is kind of fitting, given that teenaged Darlene always had a "tomboy" look, so it makes sense that she'd be cool with her son being creative with his wardrobe, too.

Gilbert, who's an executive producer on the show, explained to Entertainment Weekly that Roseanne's grandson isn't gay or transgender (not that it should matter if he was), but that he just likes to wear different kinds of clothes, plain and simple. On the original casting notice, he was described as "sensitive, effeminate," and that he "displays qualities of both male and female young child traits," according to Fox News.

Here's A Pic Of The Character

Gilbert explained that he's a lot like a bunch of kids she knows IRL. She explained to Entertainment Weekly that he doesn't identify as a girl:

He doesn’t. That’s something that got out in the press that’s not true. He’s not a transgender character. He’s a little boy. He’s based on a few kids in my life that are boys who dress in more traditionally feminine clothing. He’s too young to be gay and he doesn’t identify as transgender, but he just likes wearing that kind of clothing and that’s where he is at this point in his life.

Gilbert's not totally correct that Mark would be, at 9 years old "too young" to know about sexual orientation or gender identity, especially since the American Academy of Pediatrics notes that some kids know as early as 6 years old that they're transgender. It's also totally normal for young kids to play with toys and wear clothes that don't correspond to a traditional gender roles and not be LGBTQ.

But they will focus on his non-binary gender identity on the show. Gilbert said that he'll dress "like that" throughout the show, but that there is one episode in which Mark, and his clothing, will get its own plot line. Gilbert emphasized again that the character is "not transgender."

One person wrote on Facebook, "Wow, what's going in the world today, you're either born a girl or a boy you don't switch. People are going crazy and any parent lets their boy or a girl change sex is got a problem and they need to have their kids taken from them right now."

Another called a child dressing in whatever clothes they want to "mental illness." "Liberals encourage this kind of behavior." Another wrote, "The normalization of mental disorder brought to you by the new world order."

Obviously, there are still a lot of people out there in the world who would gain something from a little education on the matter. Representation is everything when it comes to television and for so many others on social media it was refreshing to hear that yet another, diverse story will be told on primetime television.

Plus, the show always tackled social issues of the day, and learning about gender identity is definitely a conversation people are having right now as more people come out, transition, and fight for some much-needed transgender civil rights. At least some people thought so on the WYFF News 4 Facebook thread. "LET OTHERS BE THEMSELVES. Who the hell are you to tell someone that's not right or anything like that?"

Another added, "This don't bother me because I feel like they're giving kids who are like this someone on television to look up to. But I don't think the Roseanne that I grew up watching would have ever went for this. Still excited for the show to start back!"

Some Fans Were Cheering The Move

Gilbert told EW in the same interview that she wanted the character to be "gender creative" in order to update the show.

She told the outlet, "This is a show that’s always been able to represent the world and talk about it without being so issue-heavy. We can do it through the dynamics of the family. I know kids like that and it seemed like a great character." Gilbert added:

I don’t want to pigeonhole him and say just because he dresses this way that’s the only thing about him. He happens to dress that way but he’s an amazing, creative, brilliant kid, which you will see, and so is the kid, Ames, who plays him.

Hopefully, the character will be able to show some people that gender is a construct society's created and it's OK for kids to try different things as they develop. At the end of the day, all kids just need to know that they're loved, supported, and empowered, and the Conners probably adore little Mark no matter what he wears.