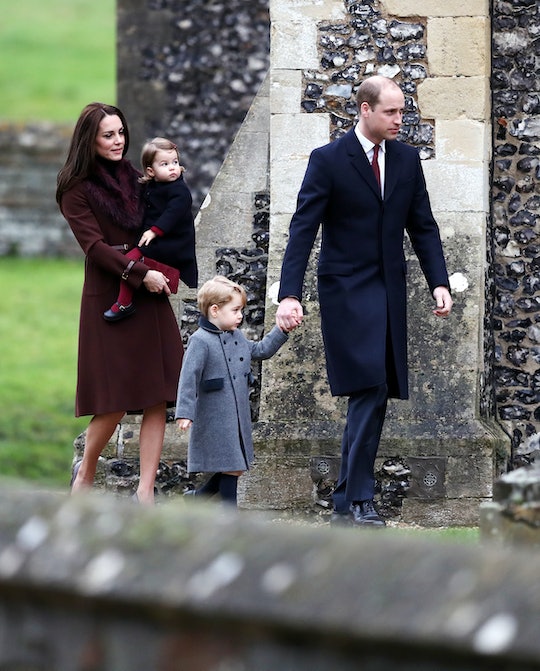 George, Charlotte & Louis Look SO Cute (& Grown Up) In Their 2018 Christmas Card

Eleven days before Christmas, the royal family gave the rest of the world quite the gifts: their annual holiday cards. In fact, the royal family's 2018 Christmas cards will definitely bring you some holiday cheer — especially if you've been itching to see a recent photo of the Cambridges as a family-of-five. On Friday, Kensington Palace shared the Duke and Duchess of Cambridge's official Christmas card photo, which shows the beautiful couple posing casually with their children at Anmer Hall, their country estate in Norfolk, according to E! News. And this year, all three youngsters managed to leave their own adorably mark on the holiday pic.

In the photo, shot by photographer Matt Porteous, William and Kate — both wearing jeans — posed against some tree branches with their little ones, and somehow, the pic seems to perfectly sum up each of their children's unique personalities. 5-year-old Prince George, for example, shared a cheeky grin while leaning on his dad's shoulders, while his 3-year-old sister, Princess Charlotte nailed a sassy princess pose. But, not to be outdone by his older siblings, a very dapper-looking 7-month-old Prince Louis looked *so* happy to be part of the shoot, and his adorable grin was the perfect touch.

This holiday will be the first the family will spend with Prince Louis in tow — the duke and duchess welcomed their youngest son in April — and it seems as though life as parents-of-three may have made the couple adopt a bit more of laid back approach to family portraits. In 2017, Kate and William shared a much more formal photo for their Christmas card, according to Hello! with the family posing for photographer Chris Jack in coordinated blue outfits (William wore a suit, while Kate wore a light blue peplum jacket and skirt by Catherine Walker) in front of a plain backdrop.

Then again, Porteous does seem to have a way of getting delightfully candid photos of the royals: he was the one who snapped the adorable photo of Prince George in honor of his fifth birthday this year, after all, and he also happened to catch the too-sweet moment of a very-animated Prince Louis looking super happy at his christening while being held by the Duchess of Cambridge.

Of course, the Cambridges weren't the only ones to release a gorgeous photo in honor of the holidays: on Friday, the palace also shared a never-before-seen photo of the Duke and Duchess of Sussex taken by photographer Chris Allerton during their private evening wedding reception at Windsor Castle's Frogmore House in May. In it, the famously-affectionate royal couple can be seen standing with their arms around each other, watching the celebratory fireworks display.

It's a super sweet moment for the newlyweds, and is also one of the few glimpses the world has received of them in their reception attire (Meghan swapped out her Givenchy wedding gown for a separate, high-necked, Stella McCartney dress later in the evening, according to Town & Country while Harry traded his traditional military uniform for a classic tuxedo). But the intimate photo also seemed to be the perfect choice for the couple's first-ever Christmas card, celebrating a year that not only included a beautiful wedding, but also the news that they will soon be welcoming their first child together.

With yet another royal baby set to arrive in the spring, 2019's royal Christmas cards will likely be even cuter. It's still pretty safe to say that both couples totally nailed it with their Christmas card photos this year, though it's also easy to see why. Between Prince Louis' arrival and Prince Harry and Meghan's wedding, there has definitely been *a lot* for the royal family to celebrate.