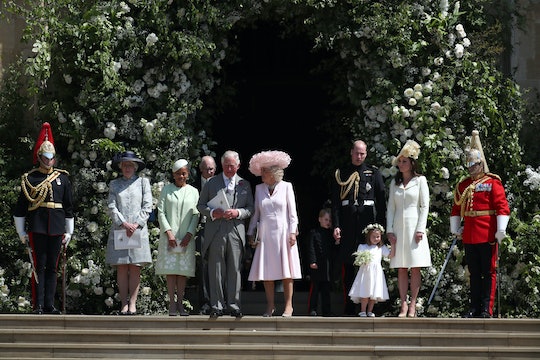 This month's royal wedding fever was a worldwide phenomenon, and served to emphasize an important point about the British monarchy: people love them. Like, they really love their royals. However, with a lifetime in the public eye comes an inevitable history that can't always be spotless. It turns out, the royal family's approval rating actually shows that some members of the family are far preferred over others... and the reasons for this are definitely fascinating.

Business Insider reported that last year, YouGov did a poll that showed Prince Charles has the lowest approval rating amongst the royals, coming in at just 36 percent believing he has a positive impact on the monarchy. The speculated reason for this is, likely, his relationship with Camilla and Diana (The New York Times identified his late ex-wife as one of the most liked royals of all time with an approval rating of over 80 percent, contributing to the public's opinion of him now). The same poll found that other members of the family are looked upon much more fondly. In particular, Prince William's rating was 78 percent, Duchess Kate's was 73 percent, and Prince Harry's was 77 percent.

However, in February of this year, the Evening Standard reported that though William and Harry have always had the highest approval ratings in the family, Harry's rating skyrocketed in recent years, reaching its apex in 2018, when he polled in at 87 percent, undoubtedly related to his then forthcoming wedding to Duchess Meghan Markle.

Despite how much the public's opinion of Harry has shifted over the years, reports show that many were unsure about Meghan Markle when the pair first announced their engagement. Though it seems surprising, Express reported that Meghan only had a 19 percent approval rating back in November of last year. For context, Camilla the Duchess of Cornwall had a 20 percent approval rating at the time. Despite how engrossed the world seemed to be about the latest royal nuptials, other polls from YouGov revealed that less people were interested than was assumed. The following was reported this month:

The numbers are interesting, considering that CNN reported an estimated 29 million people tuned in from around the world to watch Harry and Meghan wed. Despite the fanfare, YouGov's report also noted that people seem far more inclined to prefer William and Kate as the next future King and Queen. In fact, more than half preferred Will over his brother, while almost two-thirds preferred Kate over Meghan.

Though the numbers are always fluctuating and opinions shift over time, it seems clear that the polled Brits have proven a few things to be true: they are skeptical of newcomers, but willing to give them a chance; they are as devoted to Diana and her legacy as ever before; they don't easily forget misdeeds, even if they occurred 20+ years ago, and finally, Will and Harry are everyone's favorites... but that was anyone's guess.