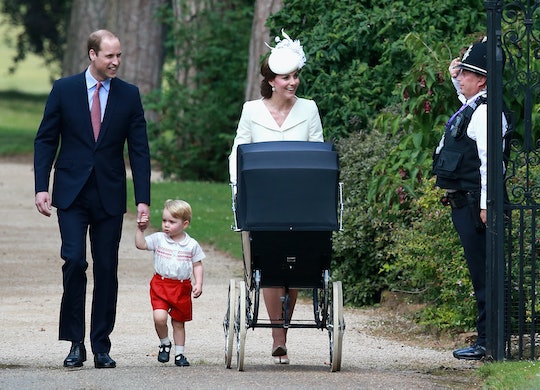 The Royal Family's Christening Traditions Are Steeped In Some Fascinating History

The christening of Prince William and Kate Middleton's third child is pretty special, according to The Sun, because it will be held at The Chapel Royal. This is the same location where Prince Louis' older brother Prince George had his christening in 2013, where his late grandmother, Princess Diana, had her christening, and where Meghan Markle was baptized three months ago, according to People. But it's not just the location that has significance — what Prince Louis wears and does throughout his big day will be rich with royal family tradition — not that this is a bad thing. But after people were able to see how the royal family's wedding traditions during the wedding of Prince Harry and Meghan Markle, they've certainly come to expect that kind of routine with any celebration hosted by the royal family.

While a christening isn't nearly as exciting as a royal wedding, it does still require quite a few important traditions.

Prince Louis' outfit is perhaps one of the most traditional things about the royal christening. Prince Louis is expected to wear the same gown that his siblings, Prince George and Princess Charlotte, were christened in, according to The Sun.

Although the gown was made in this millennium, according to The Sun, it is an exact replica of the gown first worn by Princess Victoria, Queen Victoria's daughter, in 1841, according to People. That same exact gown was worn by 62 babies in the royal family, according to Newsweek — including Prince William — until it became too delicate to wear and had to be retired in 2004.

The Person In Charge

The Archbishop of Canterbury, the Most Reverend Justin Welby will baptize Prince Louis, according to The Sun, which falls in line with royal family tradition. The Archbishop of Canterbury is the most senior bishop in the Church of England who was "installed in 2013," according to Good Housekeeping, which meant he was able to baptize Prince Louis' siblings and Markle.

The Items Used In The Christening

Prince Louis can't be baptized with just any water. Instead, the Archbisop of Canterbury baptizes children with water from the River Jordan, according to Good Housekeeping, which is believed to be the location of Jesus' baptism by Saint John. Babies are also baptized with this water using the Lily Font — a bowl used during Princess Victoria's christening in 1841, according to the Royal Collection. The bowl has been used in the christening of all of the queen's children and grandchildren, according to Good Housekeeping, with the exception of Princess Eugenie.

One of the best christening traditions is the portraits released by the royal family after the big day. In 2015, after Princess Charlotte's christening, Kensington Palace released a collection of family photos, according to People, and royal watchers were finally able to get a good look at the new royal baby and the family of four. In addition to the intimate family portrait, Kensington Palace also released a full family photo with four generations of the British heirs, according to People. Although royal family fans often get to see photos of the royal family together, official family portraits are even more fancy and exciting to look at.